I recently wrote about importing data in RailsAdmin. RailsAdmin is a Rails engine that provides a nice admin interface for managing your data, which comes packed with configuration options.

In a recent Ruby on Rails ecommerce project, I’ve been using RailsAdmin, Piggybak (a Rails ecommerce gem supported by End Point), and have been building out custom front-end features such as advanced search and downloadable product support. When this client came to End Point with the project, we offered several options for handling data migration from a legacy system to the new Rails application:

The client preferred option #3. Using a quick script for generating custom actions for RailsAdmin, I developed a new gem called rails_admin_import to handle import that could be plugged into RailsAdmin. Below are some technical details on the generic import solution. 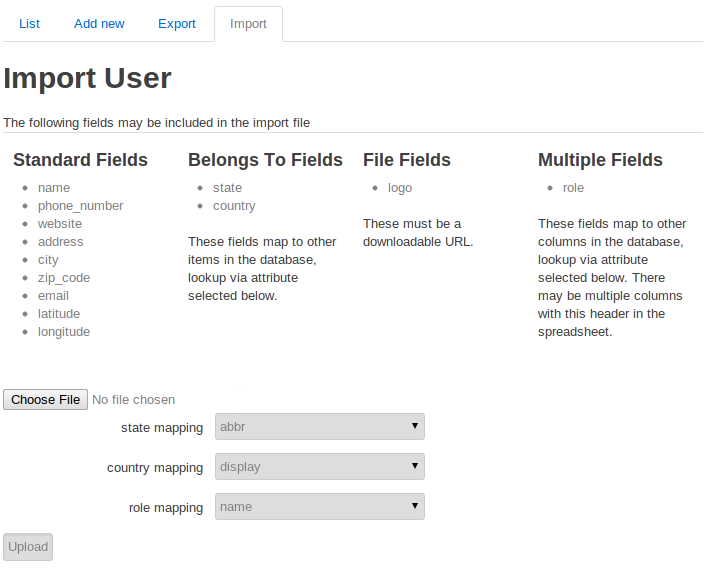 And the following instance methods:

The general approach here is that the import of files, belongs_to, many_to_many relationships, and standard fields makes up the import process for a single object. The run_import method collects success and failure messages for each object import attempt and those results are presented to the user. A regular ActiveRecord save method is called on the object, so the existing validation of objects during each save applies.

One of the tricky parts here is how to handle import of fields representing associations. Given a user model that belongs to a state, country, and has many roles, how would one decide what state, country, or role value to include in the import?

I’ve solved this by including a dropdown to select the attribute used for mapping in the form. Each of the dropdowns contains a list of model attributes that are used for association mapping. A user can then select the associated mappings when they upload a file. In a real-life situation, I may import the state data via abbreviation, country via display name (e.g. “United States”, “Canada”) and role via the role name (e.g. “admin”). My data import file might look like this:

Many to Many Relationships

Many to many relationships are handled by allowing multiple columns in the CSV to correspond to the imported data. For example, there may be two columns for role on the user import, where users may be assigned to multiple roles. This may not be suitable for data with a large number of many to many assignments.

In this scenario, I’ve chosen to use open-uri to request existing files from a URL. The CSV must contain the URL for that file to be imported. The import process downloads the file and attaches it to the imported object.

If the file request fails, an error is added to the object and presented to the user. This method may not be suitable for handling files that do not currently exist on a web server, but it was suitable for migrating a legacy application.

Following RailsAdmin’s example for setting configurations, I’ve added the ability to allow the import display to be set for each model.

The above configuration will yield success and error messages with the user.name, e.g.: 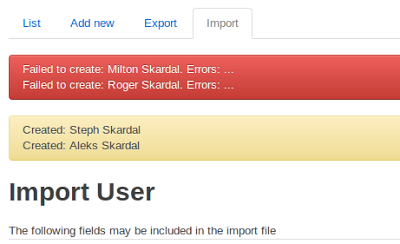 In addition to allowing a configurable display option, I’ve added the configuration for excluding fields.

The above configuration will exclude the specified fields during the import, and they will not display on the import page.

Another piece of functionality that I found necessary for various imports was to hook in additional import functionality. Any model can have an instance method before_import_save that accepts the row of CSV data and map of CSV keys to perform additional tasks. For example:

The above method will create nested items during the import process. This simple extensibility allows for additional data to be handled upon import outside the realm of has_and_belongs_to and belongs_to relationships.

Fields for additional nested data can be defined with the extra_fields configuration, and are shown on the import page.

As I mentioned above, I used a script to generate this Engine. Using RailsAdmin configurable actions, import must be added as an action:

And CanCan settings must be updated to allow for import if applicable, e.g.:

My goal in developing this tool was to produce reusable functionality that could easily be applied to multiple models with different import needs, and to use this tool across Rails applications. I’ve already used this gem in another Rails 3.1 project to quickly import data that would otherwise be difficult to deal with manually. The combination of association mapping and configurability produces a flexibility that encourages reusability.

Feel free to review or check out the code here.