Update #1: Read an update to this functionality here.

Update #2: This article was written in January of 2012, and the code related to the RailsAdmin actions no longer applies to the current release. Please make sure to read the RailsAdmin documentation regarding current action implementation.

I’ve blogged about RailsAdmin a few times lately. I’ve now used it for several projects, and have included it as a based for the Admin interface my recent released Ruby on Rails Ecommerce Engine (Piggybak). One thing that I found lacking in RailsAdmin is the ability to import data. However, it has come up in the RailsAdmin Google Group and it may be examined in the future. One problem with developing import functionality is that it’s tightly coupled to the data and application logic, so building out generic import functionality may need more thought to allow for elegant extensibility.

For a recent ecommerce project using RailsAdmin and Piggybak, I was required to build out import functionality. The client preferred this method to writing a simple migration to migrate their data from a legacy app to the new app, because this import functionality would be reusable in the future. Here are the steps that I went through to add Import functionality:

First, I created a custom admin controller for my application in the app/controllers/ directory that inherits from RailsAdmin::MainController. This RailsAdmin controller has several before filters to set the required RailsAdmin variables, and defines the correct layout.

In my routes file, I introduced a new named route for import to point to the new custom controller. This action will be a get or a post.

Next, I copied over the RailsAdmin app/views/rails_admin/_model_links.html.haml view to my application to override RailsAdmin’s view. I made the following addition to this file:

With this logic, the Import tab shows only if the user has import access on the model. Note that the named route for the import must be prefixed with “main_app.”, because it belongs to the main application and not RailsAdmin.

My application uses CanCan with RailsAdmin, so I leveraged CanCan to control which models are importable. The CanCan Ability class (app/models/ability.rb) was updated to contain the following, to allow exclude import on all models, and then allow import on several specific models.

I now see an Import tab in the admin:

Next, I created a view for displaying the import form. Here’s a generic example to display the set of fields that can be imported, and the form: 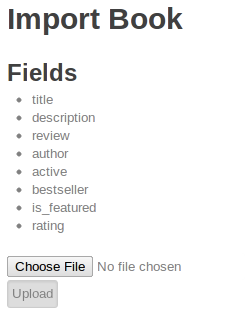 Finally, the code for the import looks something like this:

Note that a hash of keys and locations is created to map keys to the columns in the imported file. This allows for flexibility in column ordering of imported files. Later, I’d like to to re-examine the CSV documentation to identify if there is a more elegant way to handle this.

Finally, I update my view to show both success and error messages, which looks sorta like this in the view: 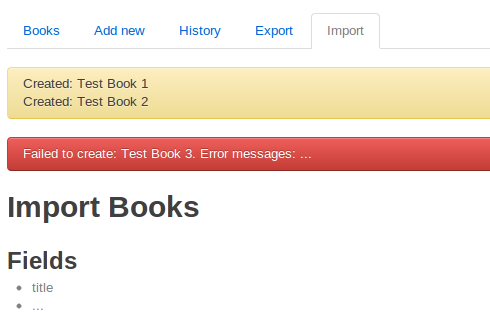 It was pretty straightforward to get this figured out. The only disadvantage I see to this method is that overriding the rails_admin view requires recopying or manual updates to the view over during upgrades of the gem. For example, if any part of the rails_admin view has changes, those changes must also be applied to the custom view. Everything else should be smooth sailing :)

In reality, my application has several additional complexities, which make it less suitable for generic application: