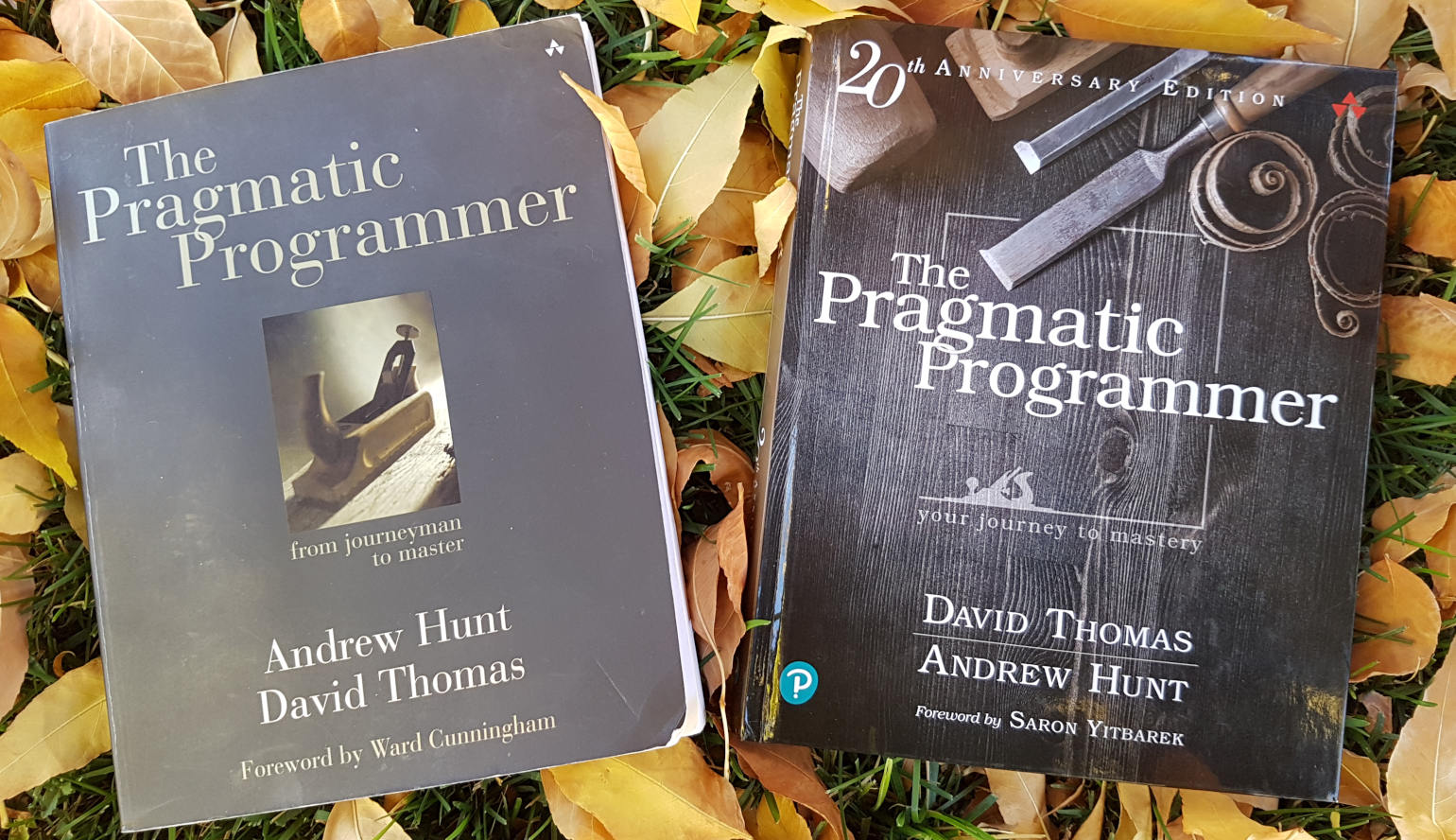 The Pragmatic Programmer is a now-classic book about software development, first published in 1999. It is old enough that it predates the famous Agile Manifesto of 2001. The authors of the book, Andy and Dave, were two of the 14 authors of that manifesto.

For its 20th anniversary in 2019, Dave and Andy created a new edition. They updated things that had become dated, such as mentions of programming languages, tools, operating systems, websites, etc. That was, I imagine, the easy part. They went on to extensively revise the entire text and incorporate new lessons learned in the past two decades.

This book is part of our company’s “work philosophy canon” that I ask every software developer at End Point to read, so for that reason and others I wanted to be familiar with the new edition and make sure it is still something I want to recommend so broadly.

The book is also required reading for university courses at Cornell (CS 3110: Data Structures and Functional Programming) and the University of Washington (CSE 331: Software Design and Implementation), probably among others!

I first read this book 19 years ago and really enjoyed it. I found that it clearly expressed many useful concepts I had stumbled upon in my own programming experience. More importantly, it gave me other helpful guidance and warned of pitfalls. Having that all collected in book form with concise, memorable chapter names and tips gave me more shared vocabulary to use with others in our work.

I also enjoyed reading the new 20th anniversary edition. It did not have the same personal impact, which is to be expected since I am at a very different point in my programming career, technical reading, and life experience. But I think the new edition has as great or even increased power for new readers.

The authors estimate that around 75% of the text has changed, and that seems about right. A few areas that stood out to me were:

The old edition had 70 tips that appear throughout the chapters. The new edition has 100 tips. In both cases they are extracted and collected on a pull-out card at the end of the book. What changed?

The new edition’s PDF version does not include the pull-out card with tips that comes with the printed book. That’s too bad, because the tips were what I most often referred to in the old edition after I finished reading it. At least Andy and Dave have published on their website a list of the 100 updated tips. It would be even nicer to have a PDF of the book’s pull-out card as they did for the old edition.

As you can see, there are many new tips. The text has been updated. It is still of excellent quality. So should you get the new edition?

I mentioned earlier two university courses that use the book. In both courses the professors allow students to use either the original 1999 version or the 2019 version. That seems like the right thing to do to me as well.

If you already have the old edition of the book, I don’t think it’s necessary to rush out and buy the new edition. The old one is still quite good and relevant, and you’ll be learning a bit of software development history by reading the older one.

If you do not yet have the book, or if you will be going over it with others who are new to it, it is probably best for you to get the new edition as well so you can be familiar with the new tips and the ways Dave & Andy describe things now.

I am glad that Dave and Andy updated their book. Their updates make sense and make the book more relevant to present-day readers.

Relatedly, it would be good to also see an update of the also excellent book Practices of an Agile Developer by Venkat Subramaniam and Andy. That is coming up on 15 years old itself. Perhaps some of its topics have been incorporated in the new edition of The Pragmatic Programmer, but as I review the table of contents, it looks like it is still mostly additive. I have cited its important maxim “Different Makes a Difference” so often that I thought it was from The Pragmatic Programmer instead!

I’ll close with this good observation and advice from Andy in their Changelog podcast interview:

Was it Dijkstra who had the Turing Award lecture about the very humble programmer? That is a critical piece of early literature… And you talk about things that haven’t changed. This was 1972? … And he makes the very important point that complexity will overwhelm us if we don’t take a very humble, very measured approach. And it’s been 30–40 years and everyone—present company included—has ignored this wonderful advice.

Humility is difficult in our environment, in our culture, and it is probably, of all the human factorsy things that you need to be a good developer, I would submit that being humble, realizing you don’t know all the answers, that you need to find out, that you need to experiment, get feedback, try it.

This part of our headlong rush into the shiny new thing is this kind of faith that “Well, that’s gonna be better. I can do it better. I’m better than this/​that.” Yeah, maybe… But you should validate that. You should try it. You should go back and read these things. You should try these other experiments.

All tips from each edition

Other comparisons of the two editions