The day started with Aaron Patterson’s keynote (watch it here). He covered features he’s been working on including auto parallel testing, cache compiled views, integration test performance, and “soup to nuts“ performance. Aaron is always good at starting his talk with self-deprecation and humor followed by sharing his extensive performance work supported by lots of numbers.

One talk I attended today was “Why We’re Bad At Hiring (And How To Fix It)” by @kerrizor of Living Social (slides here, video here). I was originally planning on attending a different talk, but a fellow conference attendee suggested this one. A few gems (not Ruby gems) from this talk were:

While I’m not extremely involved in the hiring processes for End Point, I am interested in the topic of growing talent within a company. The notes specifically related to identifying your own hiring biases was compelling.

I also attended a few talks on testing. My favorite little gem from one of these talks was the idea that when writing tests, one should try to balance between readability, maintainability, and performance, see: 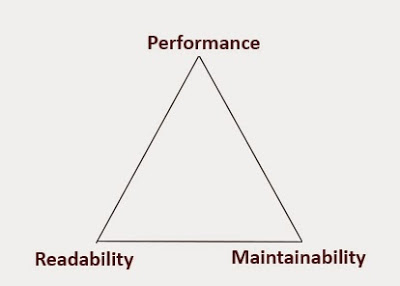 Eduardo Gutierrez gave a talk on Capybara where he went through explicit examples of balancing maintainability, readability, and performance in Capybara. I’ll update this post to include links to all these talks when they become available. Here are the videos & slides for these talks: