Recently we experimented internally with integrating Vue Storefront and Magento 2.3. Vue Storefront is an open source Progressive Web App (PWA) that aims to work with many ecommerce platforms.

Since Vue Storefront seems to be most commonly used with Magento, we decided to start our experiment with a standard Vue Storefront/​Magento 2.3 proof-of-concept integration.

OK, to be honest, at the beginning we blindly expected that Vue Storefront would be a copy/​paste front-end template solution that would fairly easily be made to work with its standard integration to a Magento backend. Sadly, this was not the case for us.

Before beginning our journey here, to summarize the Vue Storefront integration with Magento let’s have a look at this diagram to see what components are included: 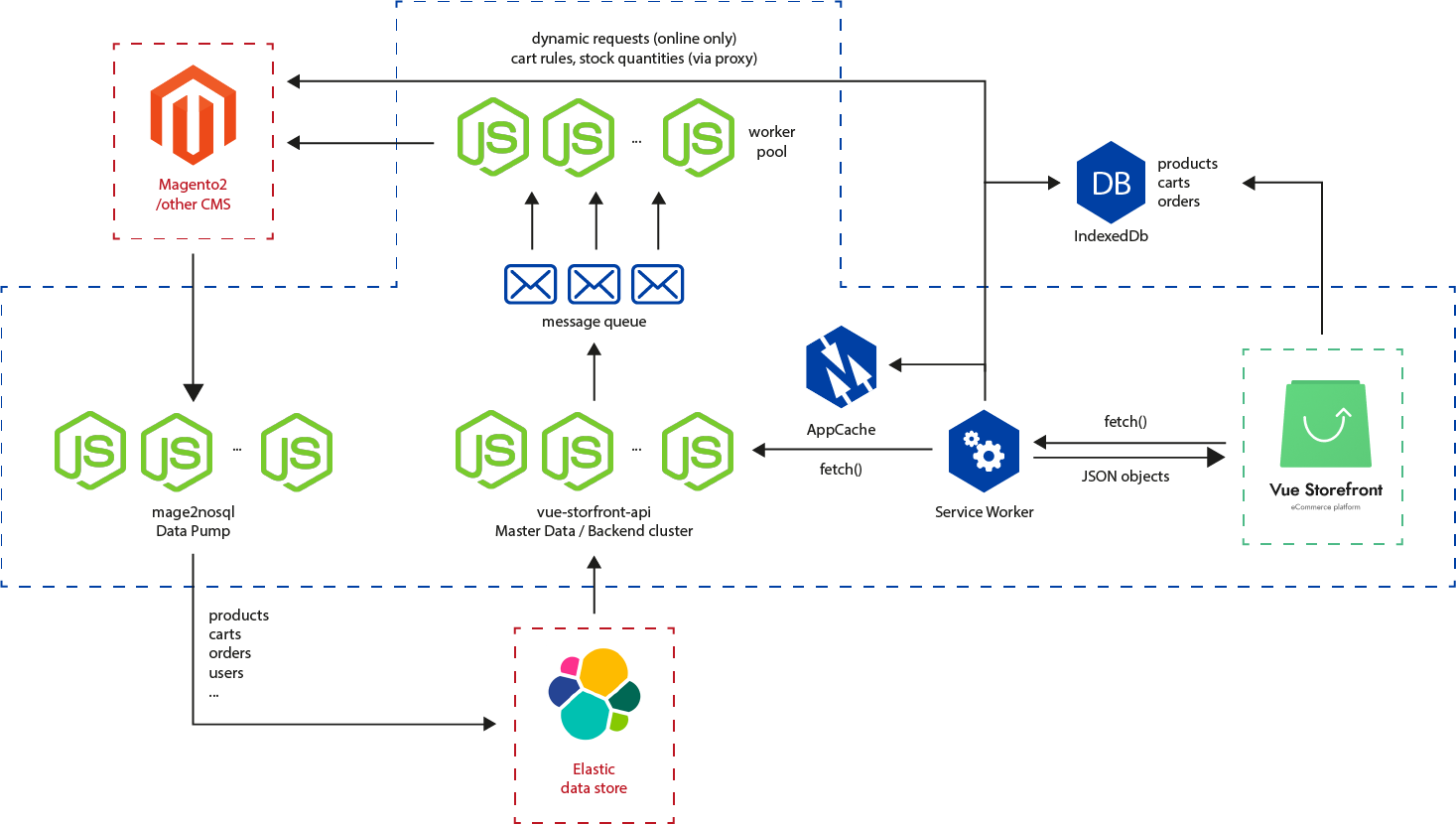 At first, we wanted to see how all these components can be installed and run on a single server with modest resources.

I downloaded and installed the following:

Installation of those components is fairly easy. We started our virtual server with 4 GB of memory, which we thought should be plenty for a toy setup.

PHP and Magento 2.3 had a series of memory usage issues. While running the mage2vuestorefront indexer Magento used most of the memory and caused Elasticsearch to go down each time I tried to index Elasticsearch. Then I configured PHP and Apache httpd server to use a very modest amount memory and made Magento 2.3 work on this server without making it crash due to unavailable memory but the performance became a nightmare on the PHP & Magento 2.3 side. mage2vuestorefront ran without issue, but very slowly.

I am not very familiar with the Magento 2 API, but while indexing Elasticsearch with mage2vuestorefront it makes several individual API calls. Especially if you have several products in Magento 2, mage2vuestorefront calls the Magento API for almost all products. Due to PHP and Magento’s high memory usage available memory might become a problem during indexing.

The Vue Storefront developers explain a big reason why they chose Elasticsearch as one of the essential components of this integration:

Vue Storefront defines itself backend-agnostic PWA e-commerce solution where Vue Storefront is a storefront as the name dictates, and Elasticsearch works as a datastore for catalog and its sibling data such as taxrule, products and so on.

I am unsure if the backend-agnostic approach even really applies to the suggested implementation of Vue Storefront with Magento 2, or if does apply with significant headaches. I’ll detail my concerns about this later.

The responsive and offline supportive design of Vue Storefront is elegant. It uses Elasticsearch via vue-storefront-api as its indexing search engine to provide a seamless user experience. Although the overall integration and the produced data structure looks complex there are only a few catalog data stores that need to be indexed on Elasticsearch. Also, since this is an ecommerce integration, you can expect that only products and product-related data are going to be available in such an integration.

There is a hamburger menu in the top-left which opens the categories menu of Vue Storefront: 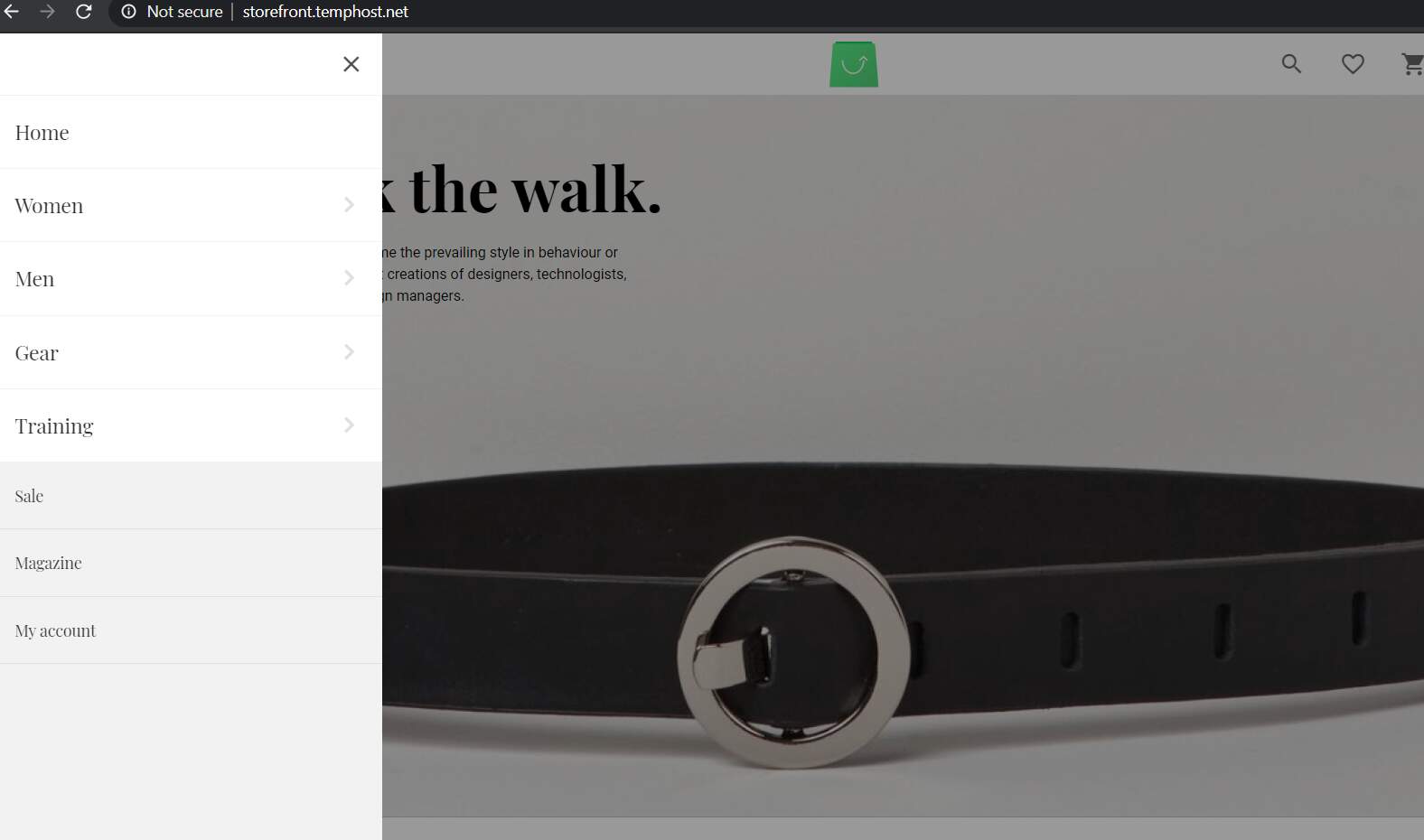 As I mentioned, the data being viewed is relatively simple according to the count of the catalog types (essentially Products, Categories, Attributes, and Tax Rules) which are already categorized and these are a bunch of specific sets of data.

By searching through the categories Women > Tops > Jackets, the search output list is shown by Vue Storefront: 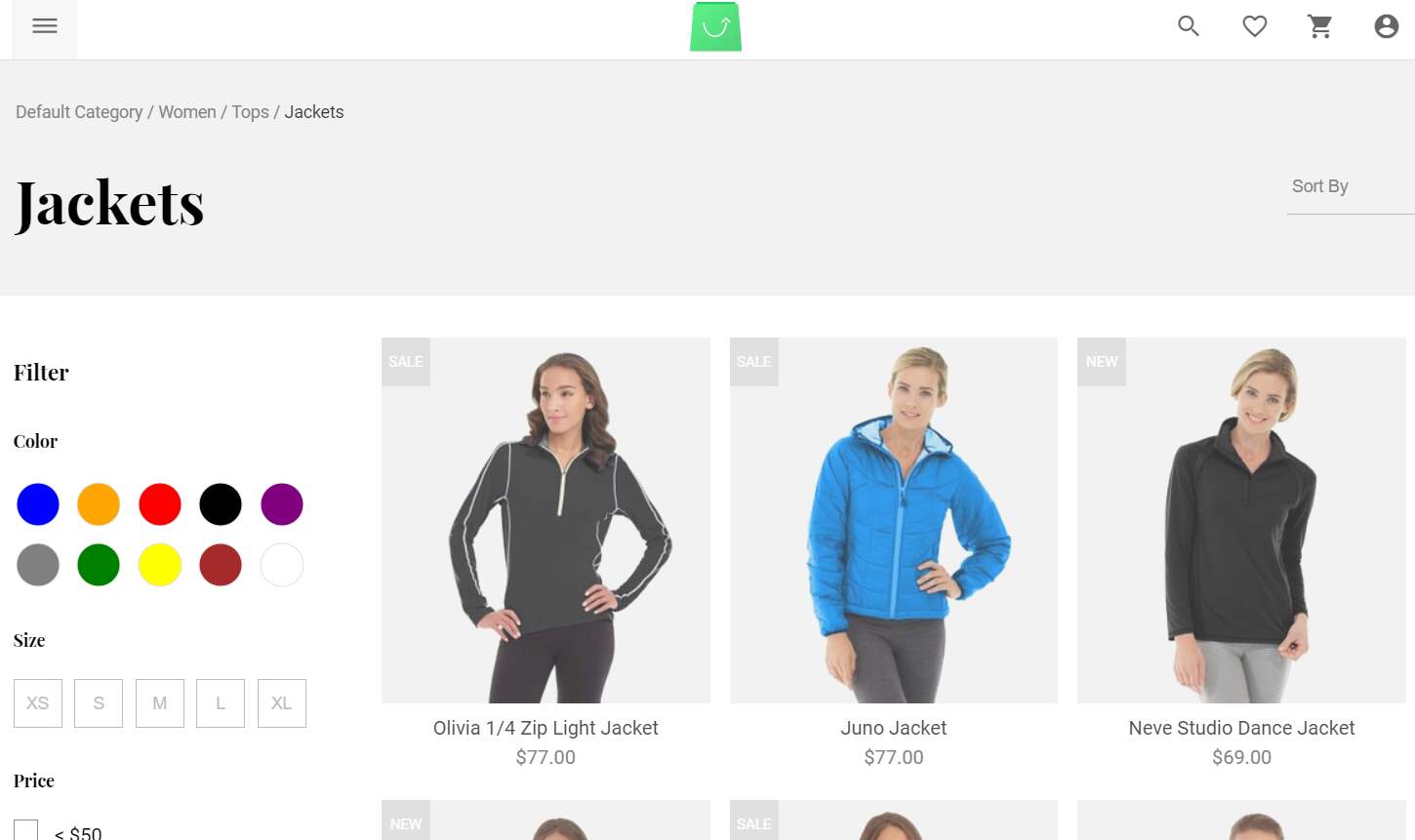 Designing a New Approach for Interchange

When exploring the features and components of Vue Storefront we discussed how we can adapt Interchange to use Vue Storefront. We ended up with two main options:

Inspired By A Similar Approach of Vue Storefront + SAP Commerce

This article discusses several approaches, including Vue Storefront developers’ boilerplate integration and their custom solutions. In the following table they show different options and comments on their resolutions.

As you can see in Figure 5, they decided to go with the 4th option as their most suitable and least problematic solution. Here is their statement of why:

After some analysis, we have come to believe that using custom middleware only for a bunch of simple requests is an additional burden and thick layer of complexity. We decided to get rid of it as well.

So, option #4 turned out to be the best choice. For the option #4, we need to parse Magento and Elasticsearch APIs and generate the compatible responses.

Here is how their solution looks according to option #4:

We decided to discard Elasticsearch when integrating Interchange with Vue Storefront for simplicity, and to cut down on the cost such additional search solutions create.

So our Interchange + Vue Storefront integration looks like this:

Compare Figure 1 with Figure 7 to see the difference between this approach and Vue Storefront’s suggested solution.

As the default SAP Commerce/​Vue Storefront integration suggests, I walked through the outputs of search results in “product”, “category”, and “attributes”. Product data JSON output has some universal attributes like name or title, description, or price, but it also has some custom product attributes adapted from the Magento 2 API (specifically, the data structure of Magento is applied).

Anyway, I moved on and produced product and product categories outputs that Vue Storefront expects as the search results at the homepage and the search box output results.

Documentation is another pain. This is discussed further in the next section, but briefly, it’s hard to say that you could clearly pick the data structure that all kind of output results from the documentation. You need to dig into the TypeScript code, and the exact search output result is what is actually being expected.

One conflict was that the identifiers are required to be numeric, not strings. If your ecommerce data structure doesn’t provide its identifiers as numbers you’ll need to alter and add a new numeric unique identifier along with the existing one, which is what I did.

I needed to set the Interchange API URL to the host property and not necessarily set an API-defining URL sub-path name to the index property above. This way our API would pretend to be the Elasticsearch endpoint as long as it can generate the JSON output that Vue Storefront expects.

Many concerns and challenges are discussed in this article on Vue Storefront + SAP Commerce integration which I mentioned earlier.

A review of some issues I detailed earlier:

Despite my concerns, I thought we could still implement our Interchange API with a front-end framework, but I hadn’t asked the question: Is it reusable enough to mantain? Each of our clients would have different UI and UX expectations. One UI template model could never be enough, which would mean continuous front-end template design and enough maintenance to match the operational cost of existing Interchange front-end solutions. Adapting existing data to Vue Storefront’s new data model would bring more costs along with it.

While Vue Storefront’s offline working model is well designed, for the purpose of integrating with a non-Magento backend, this is overshadowed by its many issues. You would be better off looking elsewhere for a more modular, truly platform-agnostic, easier-maintained, component- and data model-independent front-end.