The rails_admin gem in Ecommerce

Update: Since writing this article, this gem has had several updates. All rails_admin configuration now must be pulled out of ActiveRecord models and into the initializer. The look and feel has also been updated. Read about it more here. Additionally, End Point has released a Ruby on Rails Ecommerce Engine with a sleek admin interface driven by rails_admin. Read more about it here.

I recently installed the rails_admin gem into a new Rails project. This particular site is currently running on Interchange, but it is not an ecommerce business, so Interchange is overkill for the site. The client has recently decided to make the switch to Rails (and DevCamps) with our help, and they have a moderate budget to do so. For the first increment, we considered installing phpMyAdmin for them to work directly with the data until a nice admin interface was built, but instead I spent a bit of time installing the rails_admin gem which has been on my mind for the last 6 months. The result: I’m extremely impressed with what rails_admin has to offer.

To show some examples of rails_admin in action, I’ll use the data model from a Sinatra ecommerce setup I recently wrote about, because it has a basic ecommerce data model that should be universally understood by my coworkers and clients.

To create a new site, I went through the standard Rails 3.0 installation steps:

Note that I also tried to use Rails 3.1 and the master branch of rails_admin, but I was experiencing a few bugs, so I decided to stick with Rails 3.0.9 for this article. Coincidentally, the rails_admin master branch just jumped to Rails 3.1 very recently. There are a few Rails 3.1 things to be aware of with the Rails 3.1 Asset Pipeline.

Out of the Box

After I got everything up and running, my first look at /admin looks nice. It shows the number of records per model, recent history, and a list of models for navigation on the right side: 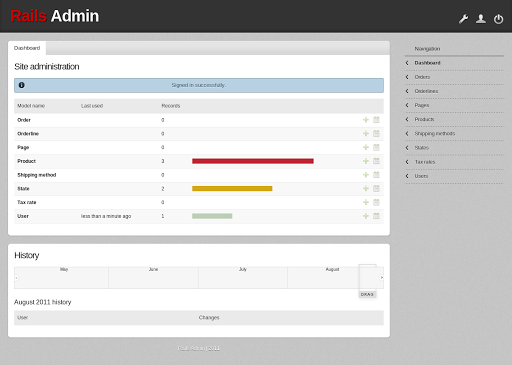 rails_admin has a nice DSL to modify the admin interface. I applied a few updates to my application, described below.

First, I wanted to hide Users from the /admin, which required the change below. Note that you can also pass a block to determine the visibility of a model, which may be valuable if you want to limit the visibility of models to specific roles or users. 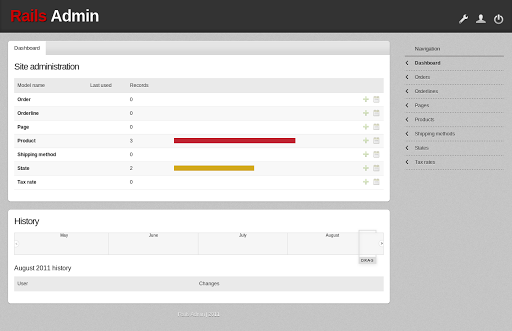 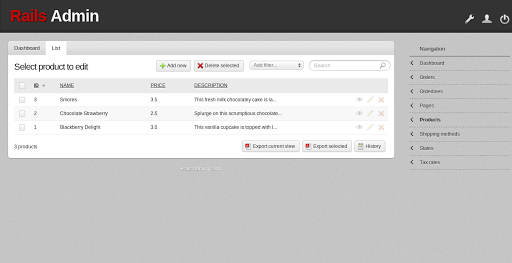 Next, I updated my products list view with the following changes, to limit the list view to the name and price field, sort by the name, and format the price:

Here’s a screenshot of the Products list view after these updates: 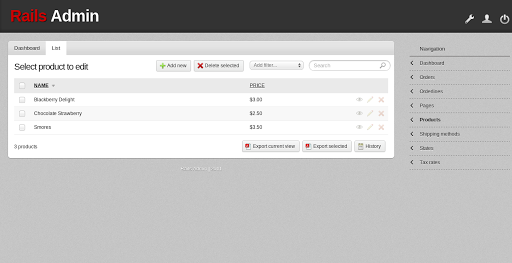 Next, I want to add a WYSIWYG editor for one of my fields, which can be accomplished with the following change: 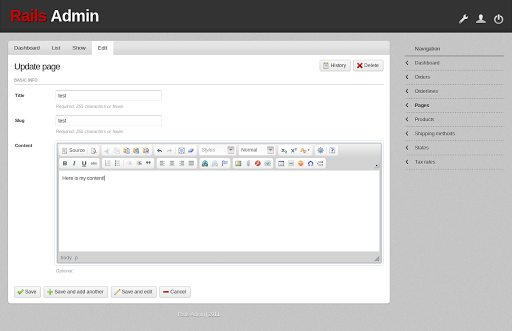 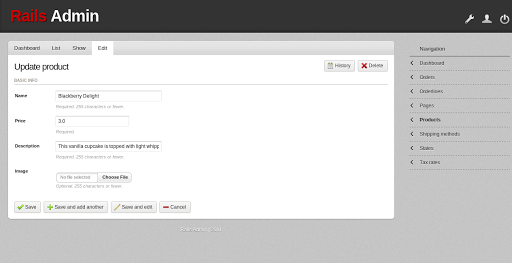 The products edit view is now a multitype form to allow for image upload.

And to update the show view, I made this change: 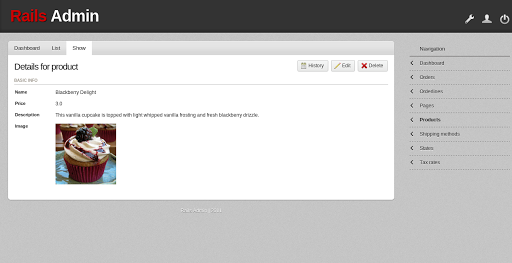 Another common update in rails_admin might be the need to override views to change the look of the backend interface. I accomplished this by copying the rails_admin partial views into my Rails application and updating them to include “My Store” branding: 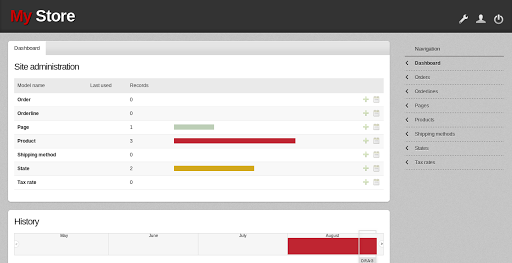 After overriding the header view, “My Store” now appears in the header.

And an override of app/views/layouts/rails_admin/main.html.haml removes “Rails Admin | 2011” from the bottom of the page.

There’s tons(!) more you can do with the gem, and it’s documented thoroughly here. rails_admin comes out of the box with export to CSV, JSON, and XML logic, which makes it a nice base for building simple APIs. It recognizes the Rails associations has_many, belongs_to, has_and_belongs_to_many, etc. It also includes user history and filtering of items and does authentication with devise, which has become a very popular user authentication choice in Rails. I found a few potential disadvantages:

Despite the potential disadvantages, I’ve been extremely impressed with it’s functionality and how much development time can be saved here to allow more time for custom business-centric functionality for a client.

Since I’ve already built a Sinatra front-end ecommerce application, I might try to get my Rails admin running with a Sinatra frontend by following tips in this article. It’ll be a little more complex here since I need to map user and admin and user routes to Rails and other routes to Sinatra, but the article covers the general idea for dispatching the routes. Why do it this way? Because you get the best of both worlds: a nice Rails backend for the CRUD interface and API management, and a speedy Sinatra driven frontend with simple paths to define product navigation, product pages, content pages, the cart and checkout process (which is not standard RESTful behavior). You can also leverage Ruby gem functionality in both Sinatra and Rails.