Updating your app to the latest versions of the framework it was built on, and dependencies it uses, is an important part of the development process. It may seem like a waste to invest time and money into it, but it can bring as much value as a new feature.

One good thing about using a framework like Ruby on Rails is that security features are baked in. This saves development time as the developer doesn’t have to re-create the wheel for logins, permissions, authentication, etc. There are many users of the framework who work together to can catch and patch vulnerabilities. Unfortunately, this means if your app hasn’t been updated its weaknesses become more obvious. A black hat attacker has easy access to a list of past Rails vulnerabilities.

Have you ever been to a website that hasn’t been updated for a while and found that everything moves slower than you’re used to? As technology improves and functions are optimized application processing time can be reduced. Most releases come with a performance update that can help your application keep up with the best of them.

The gems your application uses also come out with updates to add new features and functionality. Usually these releases are made to work with the latest Rails versions. If you want to utilize them you’ll have to meet the minimum Rails version requirements.

Taking it step by step

When updating your Rails app, you can’t just jump to the latest version. Updating to the next major release one at a time is recommended. This allows you to fix bugs as you go rather than trying to figure out what change broke what code.

The full list of Rails releases can be found here.

Any of these updates can introduce bugs, but the biggest pain points will be the major version changes: 4 to 5, 5 to 6, etc.

After changing the Rails and Ruby versions in the Gemfile, run bundle update rails.

Some gems won’t be happy with the Rails update and will also need to be updated. Once this is done run bundle update rails again. If there are more errors, fix them. If it’s successful bundle install can then be run. This will ensure all the gems are properly installed. 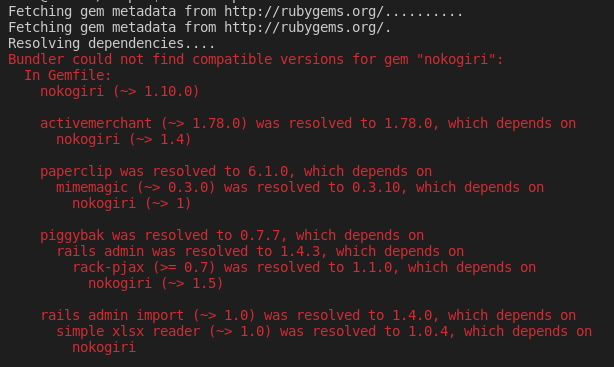 Also make sure to start up your server and verify there’s no problems there.

Even if your app builds correctly that doesn’t mean different parts of your app didn’t explode. Functions that worked in a previous version might have been deprecated in the newest version.

For example, I came across this error in a recent update:

The find_all_by_X function was no longer working. Thankfully Stack Overflow is there to help us understand what changes were made and how to fix them. This function was deprecated in Rails 4, so S.find_all_by_X_ID(x_ids) functions need to change to S.where(x_id: x_ids). Knowing this I was able to search the codebase for other find_all_by_ functions and change all of them.

For large Rails updates (5.2.0 → 6.0.0), a full test of the app will need to be done. All functionality and pages should be verified and fixes applied.

For smaller Rails updates (4.0.0 → 4.1.0), you can get away with a smaller test suite. You can stick to testing the big, commonly used features of the application. Of course, if you want to be thorough, a full test can also be done.

Sometimes a gem will no longer be supported by the developer and no update has been made to allow it to work with the latest version of Rails. We have two options on how to proceed:

We’re in the home stretch now. Rails is now on the most recent version and everything in the app is working correctly.

The last recommended task is to update all gems to their latest versions. This will open up the gems' latest features and make future Ruby on Rails updates easier.

Gems should be updated individually by running the command bundle update #GemName.