I just returned from the Perl Dancer Conference, held in Vienna, Austria. It was a jam-packed schedule of two days of training and two conference days, with five of the nine Dancer core developers in attendance. 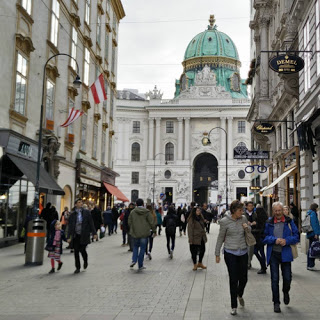 Kohlmarkt street, Wien, by this author

If you aren’t familiar with Perl Dancer, it is a modern framework for Perl for building web applications. Dancer1 originated as a port of Ruby’s Sinatra project, but has officially been replaced with a rewrite called Dancer2, based on Moo, with Dancer1 being frozen and only receiving security fixes. The Interchange 5 e-commerce package is gradually being replaced by Dancer plugins.

Day 1 began with a training on Dancer2 by Sawyer X and Mickey Nasriachi, two Dancer core devs. During the training, the attendees worked on adding functionality to a sample Dancer app. Some of my takeaways from the training:

Day 2 was DBIx::Class training, led by Stefan Hornburg and Peter Mottram, with assistance from Peter Rabbitson, the DBIx::Class maintainer.

DBIx::Class (a.k.a. DBIC) is an Object Relational Mapper for Perl. It exists to provide a standard, object-oriented way to deal with SQL queries. I am new to DBIC, and it was a lot to take in, but at least one advantage I could see was helping a project be able to change database back-ends, without having to rewrite code (cue PostgreSQL vs MySQL arguments).

I took copious notes, but it seems that the true learning takes place only as one begins to implement and experiment. Without going into too much detail, some of my notes included:

The training days were truly like drinking from a firehose, with so much good information. I am looking forward to putting this into practice!

Stay tuned for my next blog post on the Conference Days.