End Point had the distinct privilege of providing a Liquid Galaxy to the Economist World Ocean Summit held in Half Moon Bay, California last week. Originally conceived as a Google Earth and Google Street View platform, the Liquid Galaxy is rapidly becoming a premiere display for ocean content as well. Google is partnering with NGOs and corporations that are actively working toward ocean sustainability. Together, these organizations capture and categorize a great deal of ocean content, with most of that content publicly available via Street View. Some of this equipment was on display next to the Liquid Galaxy: a Trekker camera for remote areas and an underwater camera provided by the Catlin Seaview Survey for capturing hi-definition panoramas underwater.

This deployment used a custom configuration with six large HDTVs arrayed in a curved 3x2 panorama. The Liquid Galaxy is able to show this content as a single large surface with geometrically-adjusted angles. In short, it’s like a bay window on a submarine. Viewers are able to navigate to different locations through a touchscreen interface, and then rotate and zoom in on detailed panoramic photos with a 6-axis controller.

End Point enjoys a close working relationship with Google, and is happy to provide a Liquid Galaxy for such events. Our engineer Neil assembled a custom frame to hold the 3x2 screen configuration (deployed for the first time here), tested all devices, adjusted viewing angles, and then deployed and supported the full rig onsite at the Ritz-Carlton Hotel in Half Moon Bay. 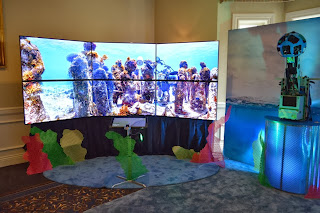 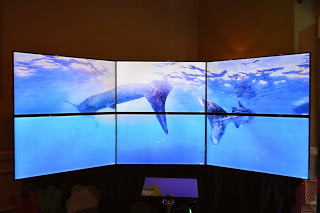 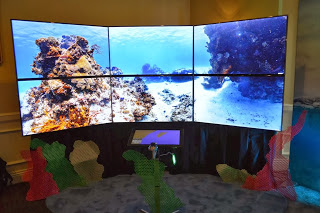