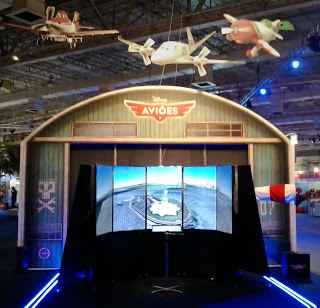 End Point recently had the pleasure to work with Disney and Google to bring the Liquid Galaxy to Disney Expo in Sao Paolo, Brazil.

Disney saw the Liquid Galaxy at the Google office in Sao Paulo and recognized the “WOW!” factor that the display platform can provide, and the Disney Expo organizers saw a great fit for promoting the release of the upcoming animated film PLANES. Disney engaged End Point to develop a custom menu of “fly to” locations featured in the movie.

Attendees at the Expo experienced those locations in immersive high definition across 7 screens surrounding the viewer. End Point created a custom menu for the touch screen with one-touch buttons that “flew” the users to locations featured in PLANES:

The experience for the attendees at the expo was such that they could virtually fly to these locations just like the characters in the movie. Other options on the touch screen menu featured the Disney resort properties:

We at End Point have always believed in the ability of the immersive Liquid Galaxy experience to present and promote information and engage an audience. Before the Disney Expo staff took notice of the Liquid Galaxy in Sao Paulo, I must confess that promoting a major motion picture was not on our radar as a potential use case.

In true show business fashion, the budget and timeline was tight. We could not have done it without our great crew who made it all happen behind the scenes. Our stars on this set are:

The Expo opened July 13 running through August 1 at the TransAmerica Center in Sao Paulo and the Liquid Galaxy is dazzling and amazing as usual. Kids, adults, and everyone in-between is seeing the magic of our planet as they zoom from location to location.

We’re proud of this opportunity to continue working with Google and to add Disney to our list of Liquid Galaxy deployments!