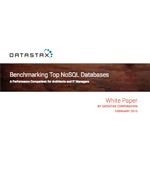 We’re excited to have recently worked on an interesting benchmarking project for DataStax, the key company supporting the Cassandra “NoSQL” database for large horizontally-scalable data stores. This was done over the course of about 2 months.

Because cloud computing resources are subject to “noisy neighbor” situations of degraded CPU or I/O performance, the tests were run 3 times each on 3 different days, with different EC2 instances to minimize any AWS-related variance.

The project involved some interesting automation challenges for repeatedly spinning up the correct numbers and types of nodes, configuring the node software, running tests, and gathering and collating results data. We kept the AWS costs more reasonable by using Spot Instances for most instances.

You can read more at DataStax’s white paper page and see all the details in the white paper itself.