Yesterday, I went through some examples using hook and theme implementation in Spree, an open source Ruby on Rails ecommerce platform. I decided to follow-up with closing thoughts and comments today.

I only spent a few hours working with the new Spree edge code (Version 0.9.5), but I was relatively happy with the Spree theme and hook implementation, as it does a better job decoupling the extension views with Spree core functionality and views. However, I found several issues that are potential areas for improvement with this release or releases to come.

One concern I have is that the entire “views” directory from SPREE_ROOT/app was moved into the theme with this theme-hook work (all of the “V” in MVC). Yesterday, I discussed how WordPress had designed a successful theme and plugin interaction and one thing I mentioned was that a WordPress theme was lightweight and comprised of several customer-facing PHP files (index, single post page, archive pages, search result page). Moving all of the Spree core views to the theme presents a couple of issues, in my opinion: 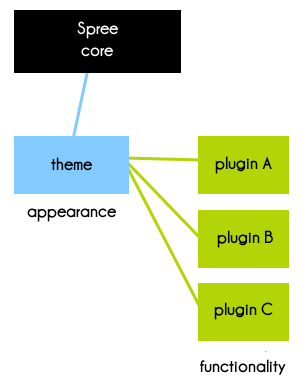 Extension views or text are hooked through the hooks defined in the theme.

Another big concern I have is the tight coupling between Spree themes and hooks. All of the hooks are defined in the Spree theme. If someone were to switch from one theme to another, there is the potential for functionality to be lost if consistency between theme hooks isn’t enforced. This issue piggybacks off of the first issue: I think the Spree core should have control of all the admin views and admin hooks. It would be great to see the views simplified or refactored and allow Spree core to control and instantiate many hooks. I think it’s great to provide the flexibility to instantiate hooks in themes, but I think the core code (admin, especially) should be more opinionated and contain its own set of views with hooks that would likely be overridden less frequently. 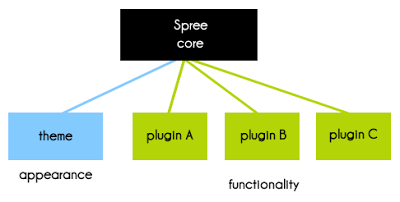 A more ideal approach to decouple appearance and functionality would require hooks to be defined in the Spree core.

In the tutorial, I also didn’t address extended core functionality with models and controllers in the extensions. The logic discussed the article Rails Ecommerce Product Optioning in Spree and Rails Approach for Spree Shopping Cart Customization should work with some view modifications to use existing hooks instead of overriding core views.

A screenshot of the tutorial app in yesterday’s article.

Despite the issues mentioned above, I think that the hook and theme work in the upcoming Spree 0.9.5 release is a big step in the right direction to improve the customization building blocks of Spree. It was mentioned in yesterday’s article that the release hasn’t been made official, but several developers have expressed an interest in working with the code. Hopefully the final kinks of theme and hook implementation will be worked out and the new release will be announced soon. Over time, the hook and theme implementation will advance and more examples and documentation will become available.