Today was the first day of LinuxTag 2009. Representing the Interchange project are Stefan Hornburg of LinuXia Systems in Germany, Davor Ocelić of Spinlock Solutions in Croatia, and I, Jon Jensen, of End Point in the U.S.

Tuesday afternoon we set up the booth (here still underway): 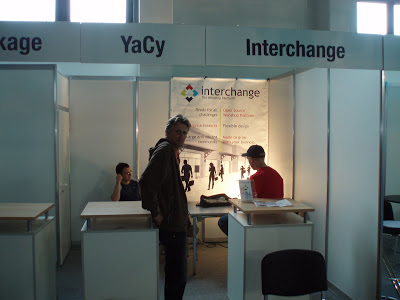 That was a fairly quiet affair since many exhibitors showed up later that afternoon or early Wednesday morning. But it was nice to get it all done early. The setup involves the network and power wiring behind the scenes, hanging the signs, unloading the marketing materials, and getting all the equipment tested (and then put away again for the night). At night back in our apartment we made some updates to the slide presentation to include many more examples of some of the busy and interesting sites we have current data on that appear in the Interchange Hall of Fame.

We’re sharing a booth with the YaCy distributed search project, and have had a few good discussions with their people.

Booth traffic was probably about the same this year as it was the first day last year—​a little slow. We talked with several people who were interested in hosted e-commerce solutions such as Interchange is.

In two cases, very interested visitors were not at all clear about how the open source partnership between project, individuals, and businesses works, and we were able to explain it. (Hopefully clearly enough that it still made sense after we were done talking!)

Specifically, one visitor represents a hosting company that wanted to pay to include Interchange in their hosting offerings. We are of course happy to take his money but have no set price to offer because, as he later succinctly put it, “Sie leben von Ihren Dienstleistungen.” That is, “You live from your [custom] services.” Exactly.

We explained the service model, his ability to download the software for free not just to evaluate, but to permanently use and resell as a hosted service to others. At the end it was clear it would’ve been simpler for him to hear it costs something like €500 or €5000 per year to be part of our hosting partner program. Yet that wouldn’t have answered the question of what support we provide, how his programmers can contribute back to the Interchange community as they customize the software, etc. So the elaboration is necessary. And we explained that each of us three Interchange developers represents our three different consulting companies, and that’s who you actually do business with, not “Interchange” per se.

The other visitor who didn’t have a background with open source software wanted something similar, a fixed price to be allowed to deploy the software and customize it for his own consulting customers. A similar discussion was had. The bottom line is, the software’s free, but work you hire us to do specifically for you is not. That’s not too complicated once you get used to it! 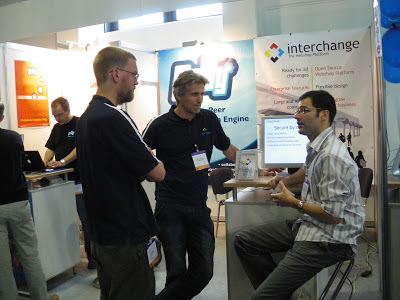 In between talking with visitors, we talked about some work Stefan’s been doing on the WellWell catalog, the need for new experimental Interchange branches which is much easier now with our new Git repository, and some custom work that’s been done before that needs to be genericized and committed to mainline Interchange. We also dropped in on the Freenode #interchange IRC channel and worked a bit with Gert van der Spoel, René Hertell, David Christensen, and others.

Otherwise, I had time to attend one talk, Die Mathematik hinter RAID, by Michael Schwartzkopff. He worked through the math to show the probability of various kinds of failures when using RAID 1 and RAID 5, discussed RAID 6 and Sun’s ZFS RAID-Z2. It was quite interesting and a good reminder that as hard disk capacity grows, what once seemed like incredibly small chances of failure (a one-bit read error, or a failure of a disk’s mechanism) become both more likely and more catastrophic when they do occur.

So we’re off to a good start, with three more days to go.