Many web projects nowadays are equipped to simulate real users and automatically test a real use case, but these end-to-end tests still have a weakness. Browser automation tools run tests by performing the interactions and assertions in the context of the DOM of the pages. That is very different from how humans use web applications, which is by looking at the user interface. Due to this, the tests’ definition of a “functional web app” differs from that of a real human.

In our end-to-end tests, one would typically instruct the test to check:

If all of the above conditions were met, then the app is considered “functional”. However, the tests have no way to verify if the right colors are actually reflected on the buttons, or if the SVG icons on the button are properly loaded and shown to the users. Unfortunately, for a real user, both of these are very crucial in telling the user how the app functions. If the stylings for the buttons are not implemented or the SVG icons for the buttons fail to load, users will not have a clear indication on how the app works, and the app will not be considered “functional” by real users, even though the functionalities of both buttons are wired correctly in the code.

Web developers also frequently deal with styling regressions. This can happen due to the “cascading” characteristic of CSS: Badly scoped CSS values may affect other elements in unrelated areas unintentionally. Many times, styling regressions slip past even the end-to-end tests with browser automation because, again, end-to-end tests only verify that the app’s functionalities are wired together, but do not check if things appear the right way visually.

Visual regression testing to the rescue

Visual regression testing adds another quality gate in the workflow to allow developers to verify that, after a code change, the user sees what is expected. For example, if the code change is supposed to modify the appearance of an element, developers can verify that it’s doing just that, or at the very least, the code change should not adversely affect other areas. Visual regression testing involves taking screenshots of tested scenarios with changes and comparing them against the baseline (usually screenshots from the stable branch).

There are many tools that help with visual regression testing. Here are some tools that you could look into:

Each tool has its own strengths and weaknesses. For today’s demonstration, we are going to look at implementing visual regression testing with Percy and see how it works.

Percy provides comprehensive guides to get you started with many popular end-to-end test frameworks such as Selenium, Cypress, TestCafe, and Capybara. You can check the documentation to see how to integrate it with your project. Since we work with Rails a lot at End Point, we are going to demonstrate Percy within a Rails project alongside Rspec/​Capybara-driven end-to-end tests.

In this article, we are going to use this simple Rails project I built for fun as the demo. It is just a simple wiki project using Vue and Rails. Let’s start.

Great, we have now successfully set up Percy. There are other configurations in the Project Settings page (e.g. browsers to enable, diff sensitivity, and whether or not to allow public viewers), but we do not have to care about them for the purpose of this demo. You can always come back and tweak this later according to your project’s requirements.

2. Integrate with the Rails project

Now, let’s look at how to integrate Percy with our demo Rails project. Percy provides a comprehensive guide to do that here.

1. First, let’s export the PERCY_TOKEN provided to us in the Builds page into our environment variable.

2. Then, we will add percy-capybara into our Gemfile and run bundle install.

That’s it! Now let’s look at adding Percy to our feature specs.

Percy has to be integrated into feature specs (i.e. end-to-end tests) because it requires the app to be running in order for it to be able to take screenshots. Hence, it will not work in unit tests where the application context is mocked and chunks of code are tested in isolation.

First, we will check out the primary working branch main and take a look at the existing feature specs:

The feature specs are pretty simple. /documents/new is a route that only registered users can access, so upon visiting the path, devise is going to ask the visitor to authenticate before they can access the page.

Adding Percy into the mix

To add Percy, simply require "percy" at the top of the spec file and add Percy.snapshot(page, { name: '<screenshot description>' }) on the lines in which we want Percy to capture.

That’s it! Easy enough, right? Next, let’s run the tests so that the screenshots are taken and sent to percy.io. To do this, we cannot run the usual bundle exec rspec. Instead, we will have to run Percy and pass rspec to it.

Note: This is the command that you should use if you have continuous integration set up.

And we’re done here! Now, if we go to percy.io, we can see that a new build has been created for us. After a few minutes, we should see the screenshots of the app.

The last step we ran was on the primary working branch. Since we set this branch as the baseline and that the screenshots from this branch would be auto-approved, we are not going to be asked to verify anything on this build.

Therefore, to demonstrate the visual diff-ing feature of Percy, let’s create another branch highlight-create-button, and let’s make the Create Document button appear bigger as well as change the text to just say Create.

Once percy.io is done processing the new screenshots, it will compare the screenshots against the baseline in the main branch. We will see this in our new build: 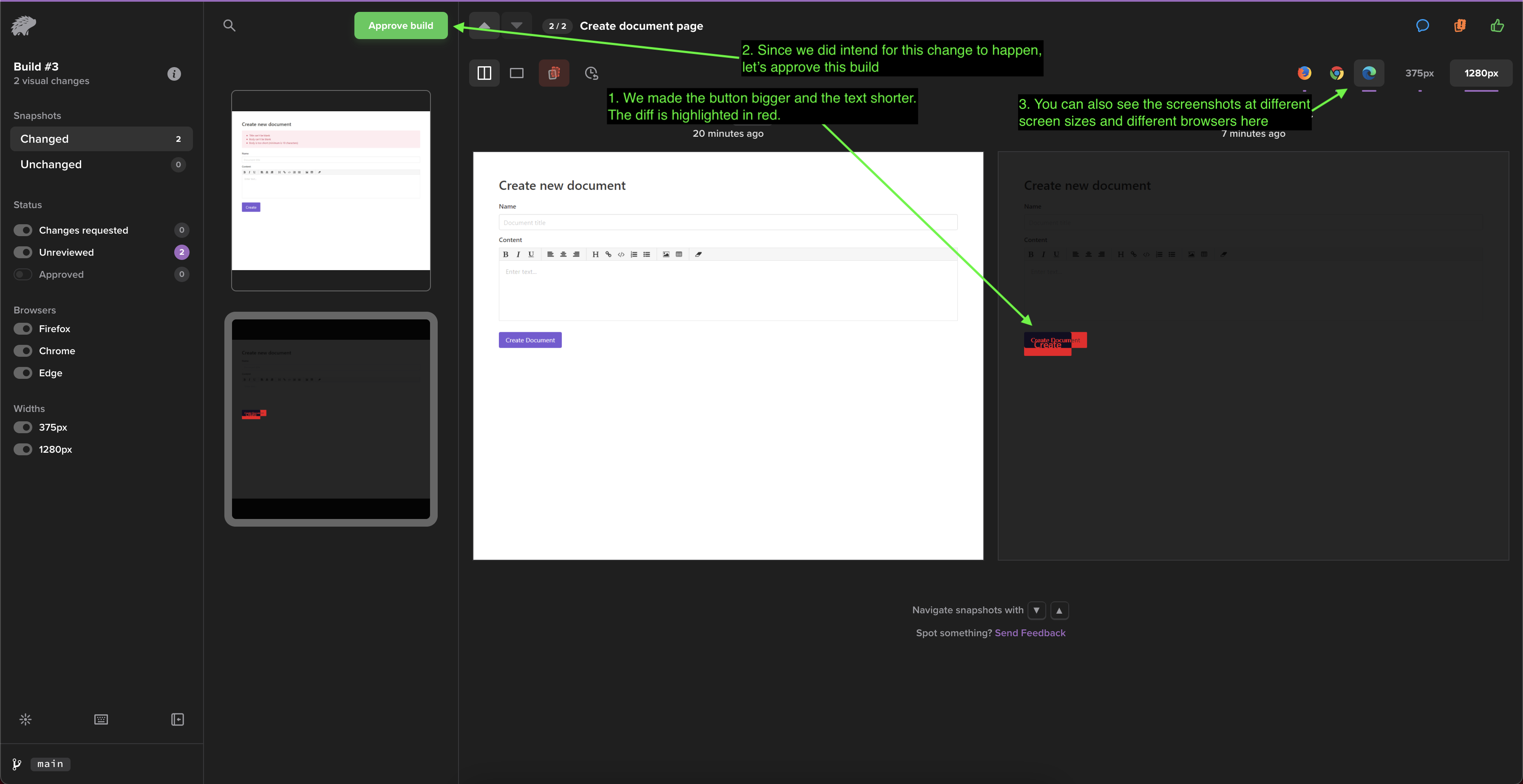 As you can see, Percy highlights any changed areas in red. This makes it easier for us to spot the differences. In this case, it is expected for the button to change, so we can just go ahead and approve the build with the green button at the top.

5. What about style regressions?

Add a text-indent: -5rem to the error messages to push the text out of its container. This is what it would look like:

Let’s run bundle exec rspec. We will get this output:

As you can see, the tests were not able to catch this styling regression. This is because the error messages specified in the assertion still exist on the page, so the use case is not considered broken in the “eyes” of the regular feature specs.

Now, run yarn percy exec -- rspec to send the screenshots to percy.io to be processed. 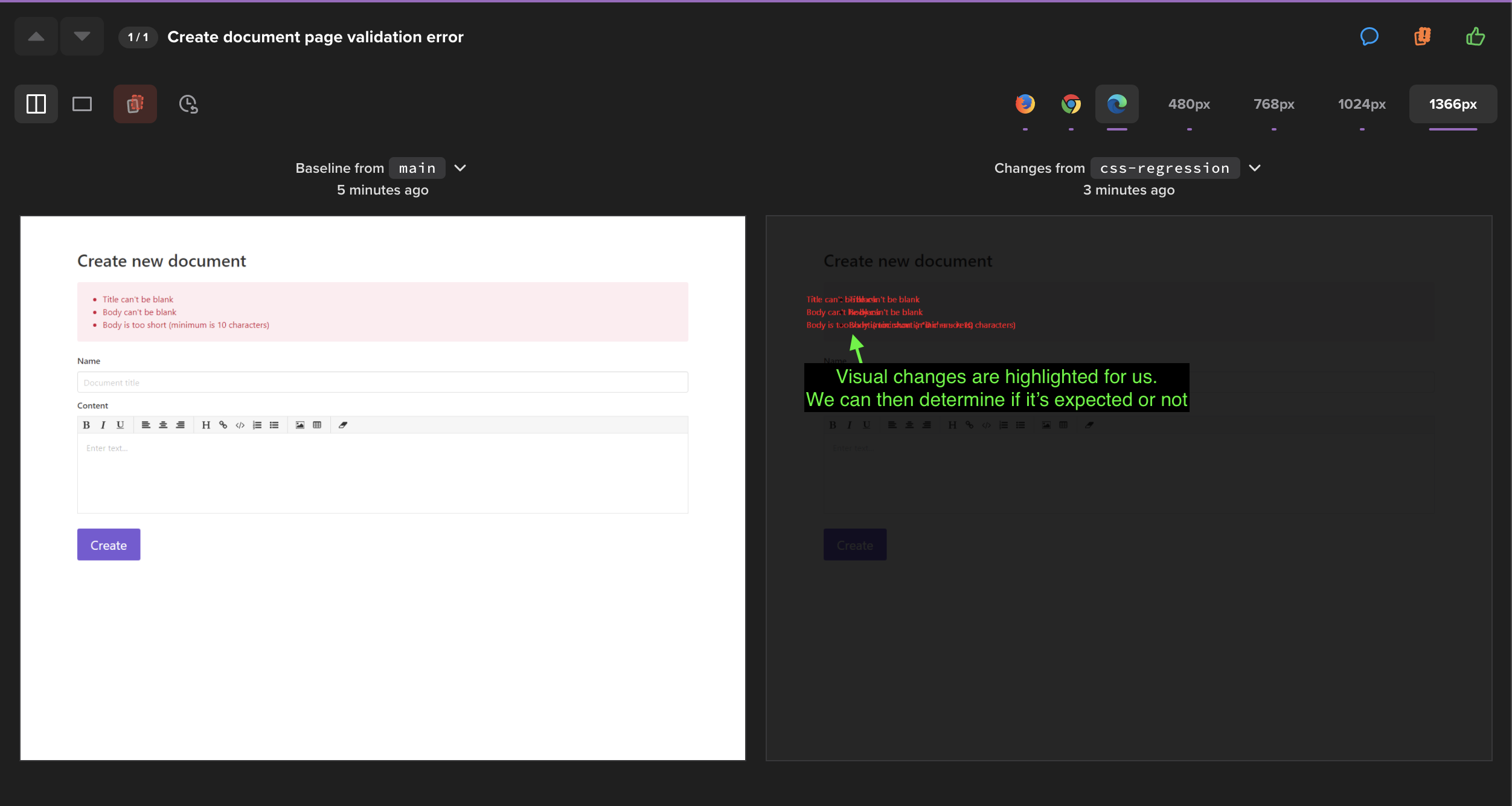 Great, percy.io was able to catch the regression here in the visual diff! A reviewer can just mark the build as “Requested changes” and leave a comment in there to have it fixed.

Percy can also help test your app’s UI on different browsers — namely Edge, Firefox, and Chrome. By default, all three browsers are enabled. You do not need to do anything else.

It can be used to test against different screen sizes as well. You can just select the screen sizes that are relevant to you and instruct Percy to take screenshots at those screen sizes automatically. This is particularly helpful as testing on several screen size variants can be very time-consuming. With Percy, you do not have to pay attention to the screenshot variants that do not diverge from the baseline.

Rerun yarn percy exec -- rspec. We can now see the different variants (browsers and screen sizes) of each scenario on the top-right corner of the screen.

That’s it! We have successfully demonstrated how Percy can help us verify expected UI changes and catch visual regressions.

As helpful and as crucial as it is, visual regression testing is not without its caveats. One of the most common issues with visual regression testing is, in some cases, it can produce a huge amount of false positives. Major-but-intentional layout shifts and changes to shared elements may result in having to review a huge amount of screenshots in the project.

For example, let’s say you increase the height of the site header (which is a common element in all pages) by 30px. When Percy processes the screenshots, it will invalidate most of the screenshots in the project, because elements would have been shifted down by 30px as a result of the taller header. For large projects, reviewing each screenshot one-by-one can be a hassle, especially with the tens of permutations for each screenshot to cater different screen sizes and browsers. As a result, one would be tempted to just click “Approve build”, thinking all changed areas would just be elements being pushed down, but that may not necessarily be true for elements with position: absolute;; they might get hidden behind the now taller header, and this may cause visual regressions to still slip into production, which kind of defeats visual testing’s original purpose.

Other than that, dealing with external resources can also result in flaky builds (e.g. if a page has an iframe or links to an external image). There are a lot of ways in which an external resource can change, e.g. image quality, content, updated resource, etc., and because these resources are outside of our control, they may become a source of false positives and a nuisance to the reviewers.

One way to deal with this is to not screenshot whole pages. Instead, screenshot only the individual components that are relevant to each scenario. This way, layout shifts in other parts of the pages will not affect the build in major ways, and it also helps cut out the changes from external resources on the page. Unfortunately, Percy does not have the capability to do this yet.

So, there you go! I hope this article has given you a good introduction to visual regression testing, why should you have it, and how to get started with it. Hope it will benefit you and your team in pushing great web applications!