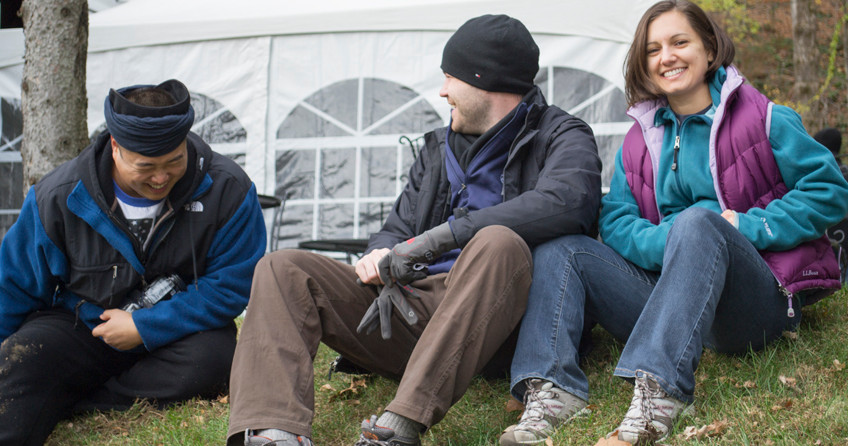 We all like how apps like Spotify or Last.fm can recommend us a song that feels so much like our taste. Being able to recommend an item to a user is very important for keeping and expanding the user base.

In this article I’ll present an overview of building a recommendation system. The approach here is quite basic. It’s grounded though in a valid and battle-tested theory. I’ll show you how to put this theory into practice by coding it in Python with the help of MXNet.

The general setup of the content recommendation challenge is that we have users and items. The task is to recommend items to a particular user.

The first one bases its outputs on the the intricate features of the item and how they relate to the user itself. The latter one uses the information about the way other, similar users rank the items. More elaborate systems base their work on both. Such systems are called hybrid recommender systems.

This article is going to focus on collaborative filtering only.

A bit of theory: matrix factorization

In the simplest terms, we can represent interactions between users and items with a matrix:

In the above case users can rate items on the scale of <-1, 1>. Notice that in reality it’s most likely that users will not rate everything. The missing ratings are represented with the dash: -.

Just by looking at the above table, we know that no amount of math is going to change the fact that user1 completely dislikes item1. The same goes for user2 liking item2 a lot. The ratings we already have make up for a fairly easy set of items to propose. The goal of a recommender is not to propose the items users know already though. We want to predict which of the “dashes” from the table are most likely to be liked the most. Putting it in other words: we want to predict the full representation of the above matrix, basing only on its “sparse” representation as shown above.

How can we solve this problem? Let’s recall the rules of multiplying two matrices:

Given two matrices: A: m × k and B: k × n, their product is another matrix C: m × n. We know that we can multiply matrices only if the second dimension of the first matrix equals the first one of the second matrix. In such a case, matrix C becomes a product of two factors: matrix A and matrix B:

Imagine now that the sparse matrix represented by the ratings table is our C. This means that there exist two matrices: A and B that factorize C.

Notice also how this factorization is saving the space needed to persist the ratings:

Then the full representation takes:

We can now choose the value for k, to be later used when constructing the factorizing matrices:

Then to store both matrices: A and B we only need:

Making it into a fraction of the previous number:

That’s a huge saving of the original space! The cost we need to pay is the small increase in the computational resources needed for the information retrieval. Inference of the rating from C based on A and B requires a dot product of the corresponding row and column of those matrices.

Reasoning about the matrix factors

What could be the intuition? To split the original matrix, for each item we need to look at all interactions with users. You can imagine the algorithm finding patterns in the ratings that later on match certain characteristics of the item. If this was about movies, the features could be that it’s a comedy or sci-fi or that it’s futuristic or embedded deeply in some ancient times. We’re essentially taking the original vector of a movie, that contains ratings — and based on that we’re distilling features of the movie that describe it best. Note that this is only a half-truth. We think about it this way just to have a way to explain why the approach works. In many cases we could have a hard time finding the actual real world aspects that those latent features follow.

A simple approach to find matrices A and B is to initialize them randomly first. Then by computing the dot product of each row and column having a known value in C, we can compute how much it differs from the known value. Because dot product is easily differentiable, we can use gradient descend to iteratively improve our matrices A and B until AB is close enough to C for our purposes.

In this article, I’m going to use a freely available database of joke ratings, called “Jester”. It contains data about ratings from 59132 users and 150 jokes.

Coding the model with MXNet

Let’s first import some of the classes and functions we’ll use later.

First step in building the training process is to create an iterator over the training batches read from the data files. To make things trivially simple, I’ll read the whole data into memory. The batches will be constructed each time from the data cached in memory.

To create a custom data iterator, we’ll need to inherit from mxnet.io.DataIter and implement at least two methods: next and reset. Here’s our simple code:

The above DataIter class expects to be given a numpy array with all the training examples. The first dimension represents a user, second an item and third the rating.

Here’s the code for reading data from disk and feeding it into the DataIter’s constructor:

Notice that I’m dividing each rating by 10 to scale the ratings from <-10,10> to <-1,1>. I’m doing it because I found the process hitting numerical overflows when using the Adam optimizer.

The function accepts the batch_size as an argument. Below I’m creating a dataset iterator yielding 64 examples at a time:

Recent versions of MXNet bring in a similar coding model to one found in PyTorch. We can use the clean approach of defining the model by extending the base class and defining the forward method. This is possible by using the mxnet.gluon module that defines the Block class.

As a full-featured deep learning framework, MXNet has its own implementation of calculating gradients automatically. The forward method in our Block inherited class is all we need to proceed with the gradient descend.

In our model, the A and B matrices will be encoded within the gluon layers of type Embedding. The Embedding class lets you specify the number of rows in the matrix as well as the dimension into which we’re “squashing” them. Using the class is very handy as it doesn’t require you to “one hot encode” our user and item IDs.

Following is the implementation of our simple model as MXNet block. Notice that all it really is, is a regression. The model is linear so we’re not using any activation function:

Next, I’m creating the MXNet computation context as well as an instance of the model itself. Before doing any kind of learning, the parameters of the model will need to be initialized:

The last line from above is initializing the A and B matrices randomly.

We are going to save the state of the model periodically to a file. We’ll be able to load them back with:

The last bit of code that we need is the training procedure itself. We’re going to code it as a function that takes the model, the data iterator and the number of epochs:

Running the trainer for 10 epochs is as simple as:

The training process is periodically outputting statistics similar to ones below:

To extract he latent matrices from the trained model we need to use the collect_params as shown below:

Each user’s latent representation is a vector of k values:

The same case is with the latent representations of jokes:

Let’s first test to see if the known values got reconstructed:

Comparing it with the value from the file:

That’s close enough. Let’s now get the set of all joke ids rated by the first user:

The above code outputs:

Because we’re mostly interested in the items that have not been yet rated by the user, we’d like to see what the model gathered about them in this context:

The above output presents joke ids along with the prediction of what rating user1 would give them. We can see that some values fall outside of the <-10, 10> range which is fine. We can simply treat the smaller than -10 ones as -10 and greater than 10 as 10.

To have a little bit more fun, let’s create code for reading the actual text of the jokes. I took the following class from StackOverflow. We’ll use it for stripping HTML tags from the jokes file:

Here’s the function that reads the file and uses the HTML tags stripping class:

Let’s now read them from disk and see an example joke our system would recommend to the first user:

One cool thing we can do with the latent vectors, is to measure how similar they are in terms of appealing to certain users. To do that we can use a so-called cosine similarity. The subject is very clearly described by Christian S. Perone in his blog post.

It makes use of the angle between the two vectors and returns its cosine. Notice that it only cares about the angle between the vectors, and not their magnitudes. The codomain of the cosine function is <-1, 1> and so is for the cosine similarity as well. It translates to our sense of similarity quite naturally: -1 meaning “the total opposite” and 1 meaning “exactly the same”.

We can trivially implement the function as a product of the dot products of the vectors normalized to units:

We can use the new measurement to rank the jokes in terms of how close they are. Here’s a function that takes a joke ID and returns list of IDs along with the similarity ratings:

The following function takes a joke_id and takes the 4 most similar jokes. It then prints them one by one in a summary:

Let’s see what jokes our system found to be cracking up the same kinds of people:

The approach presented here is relatively simple, yet people have found it surprisingly accurate. It depends though on having enough data for each item. Otherwise the accuracy degrades. An extreme case of not having enough data is called a cold start.

Also, accuracy is not the only goal. Wikipedia lists features like “Serendipity” as an important factor of a successful system among others:

Serendipity is a measure of “how surprising the recommendations are”. For instance, a recommender system that recommends milk to a customer in a grocery store might be perfectly accurate, but it is not a good recommendation because it is an obvious item for the customer to buy. However, high scores of serendipity may have a negative impact on accuracy.

Researchers have been working on different approaches to tackling the above mentioned issues. Netflix is known to be using a “hybrid” approach — one that uses both content and collaborative based recommender. As per Wikipedia:

Netflix is a good example of the use of hybrid recommender systems. The website makes recommendations by comparing the watching and searching habits of similar users (i.e., collaborative filtering) as well as by offering movies that share characteristics with films that a user has rated highly (content-based filtering).