Liquid Galaxy at UNESCO in Paris 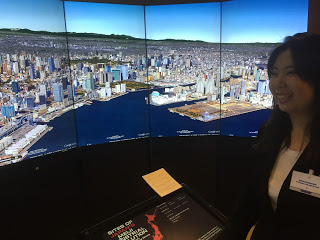 The National Congress of Industrial Heritage of Japan (NCoIH) recently deployed a Liquid Galaxy at UNESCO Headquarters in Paris, France. The display showed several locations throughout southern Japan that were key to her rapid industrialization in the late 19th and early 20th century. Over the span of 30 years, Japan went from an agrarian society dominated by Samurai still wearing swords in public to an industrial powerhouse, forging steel and building ships that would eventually form a world-class navy and an industrial base that still dominates many lead global industries.

End Point assisted by supplying the servers, frame, and display hardware for this temporary installation. The NCoIH supplied panoramic photos, historical records, and location information. Together using our Roscoe Content Management Application, we built out presentations that guided the viewer through several storylines for each location: viewers could see the early periods of Trial & Error and then later industrial mastery, or could view the locations by technology: coal mining, shipbuilding, and steel making. The touchscreen interface was custom-designed to allow a self-exploration among these storylines, and also showed thumbnail images of each scene in the presentations that, when touched, brought the viewer directly to that location and showed a short explanatory text, historical photos, as well as transitioning directly into Google Street View to show the preserved site.

From a technical point of view, End Point debuted several new features with this deployment: 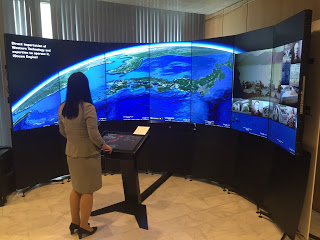 Overall, the exhibit was a great success. Several diplomats from European, African, Asian, and American countries came to the display, explored the sites, and expressed their wonderment at the platform’s ability to bring a given location and history into such vivid detail. Japan recently won recognition for these sites from the overall UNESCO governing body, and this exhibit was a chance to show those locations back to the UNESCO delegates.

From here, the Liquid Galaxy will be shipped to Japan where it will be installed permanently at a regional museum, hopefully to be joined by a whole chain of Liquid Galaxy platforms throughout Japan showing her rich history and heritage to museum visitors.