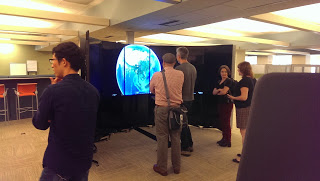 End Point has brought another academic Liquid Galaxy online! This new display platform is now on the storied campus of University of North Carolina - Chapel Hill. With a strong background in programming and technology, UNC wanted a premiere interactive platform to showcase the GIS data and other presentations the school researchers are putting together.

Neil Elliott, our hardware manager for Liquid Galaxy, first assembled, preconfigured, and tested the computer stack at our facility in Tennessee, bringing together the head node, display nodes, power control units, switches, and cases to build a “Liquid Galaxy Express”: an entirely self-contained Liquid Galaxy unit that fits in just under 1-meter cubed. From there, Neil drove the computers and custom-built frame directly to Chapel Hill. Our install manager Neil described it as: “It’s a great drive from our office in Tennessee over the mountains to Chapel Hill. When I arrived, the UNC staff was on-hand to help assemble things, lay out the space, and it all went very quickly. We were live by 4pm that same day.”

Overall, the installation took just over 6 hours, including assembly and final configuration. The University’s library and IT staff were on hand to assist with the frame assembly and mounting the dazzling 55” Samsung commercial displays. That evening, students were exploring and the staff was tweeting out Vines of the new display.

“From the moment the installer closed his tool box, students have been lining up non-stop to try the screens,” said Amanda Henley, the Library’s Geographic Information Systems Librarian. Located on the 2nd floor of the Davis Library, the Liquid Galaxy is open to students and staff for research and exploration. End Point is looking forward to working closely with the staff at UNC, as well as with their CompSci teams on developing great new functionality for the Liquid Galaxy. If you would like to get a Liquid Galaxy at your school, call us! 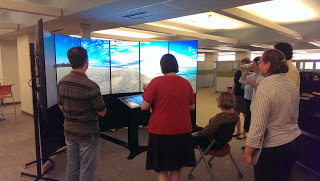 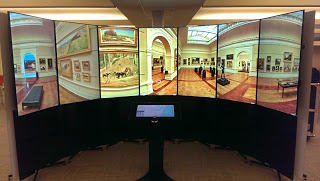 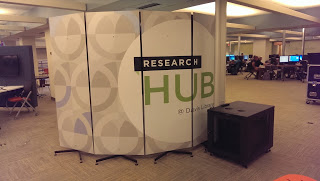