Liquid Galaxy at MundoGeo in Brazil 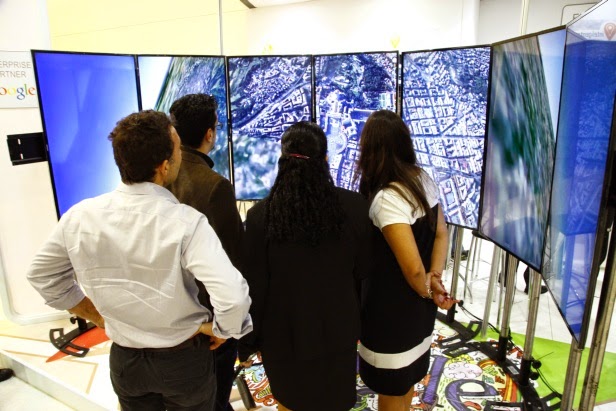 End Point reached another milestone last week when we hosted one of our own Liquid Galaxies at a conference in Brazil for the first time. End Point brought our new Brazilian Liquid Galaxy to MundoGeo Connect in São Paulo, which ran from May 7th to 9th, 2014. MundoGeo Connect is the largest geospatial solutions event in Latin America, which this year drew almost five thousand visitors, among them businessmen, specialists, and government agencies from all over the continent. It was the perfect opportunity to showcase the Liquid Galaxy as the powerful and immersive GIS interaction tool that it is.

Similar to last year, Liquid Galaxy was the runaway hit of the show, and no one in the building left without coming around for a test flight in the Google Earth spaceship. But it was when we started showcasing the GIS functionality, the KML layers, along with other applications like panoramic imagery, embedded video, and live streaming video, that visitors really started understanding its potential for data visualizations, corporate marketing, public outreach, conference communications, and sheer immersive entertainment.

As the Latin American market continues to grow with commodities such as mining and petroleum, GIS visualization becomes more important than ever. Brazil in particular, with the World Cup and Olympics scheduled, has a huge need for urban planning, metro-mapping, and multi-video integration. The Liquid Galaxy can play a pivotal role in enabling companies to fully exploit their data and multimedia content.