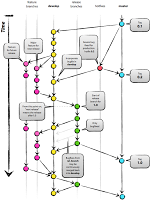 There was a significant blog post some years ago. It introduced a “successful” workflow for using Git. This workflow was named Gitflow. One of the reasons this blog post was significant is that it was the first structured workflow that many developers had been exposed to for using Git. Before Gitflow was introduced, most developers didn’t work with Git like that. And if you remember when it was introduced back in 2010, it created quite a buzz. People praised it as “the” way to work with Git. Some adopted it so quickly and full heartedly that they dismissed any other way to use Git as immature or childish. It became, in a way, a movement.

I start with this little bit of history to talk about the void that was filled by Gitflow. There was clearly something that drew people to it that wasn’t there before. It questioned the way they were working with Git and offered something different that worked “successfully” for someone else. I supposed many developers didn’t have much confidence or strong feelings about their use of Git before they heard of Gitflow. And so they followed someone who clearly did have confidence and strong feelings about a particular workflow. Some of you may be questioning your current Git workflow now and can relate to what I’m describing. However, I’m not going to prescribe a particular workflow for you as “the” way to do it.

Does your Git workflow help your business owners? Does it help your project managers or the Operations team? These are questions you should be thinking about. And by doing so, you should realize that there is no “one size fits all” workflow that will do all that for every case. There are many different workflows based on different needs and uses. Some are for large complex projects and some are extremely simple. What you need to ask is- what will best help my team/project/organization to develop, release, and maintain software effectively? Let’s look at a few workflow examples and see. 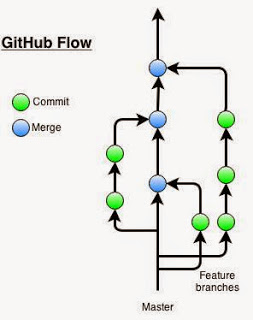 GitHub’s own workflow, their internal workflow, is quite different from what everyone else does who uses GitHub. It is based on a set of simple business choices:

They release many times per day to production using this model. They branch off master for every change they make, hot fixes and features are treated the same. Then they merge back into master and release. They even have automated their releases using an irc bot. 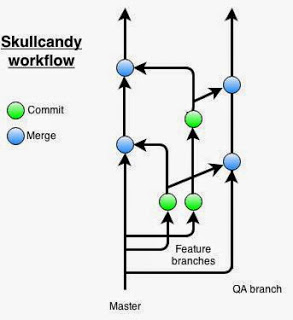 When I worked for Skullcandy we used a workflow loosely based on the GitHub Flow model, but altered a bit. We used a Scrum Agile methodology with well defined sprints of work and deliverables at the end of each sprint. The workflow followed these business choices: 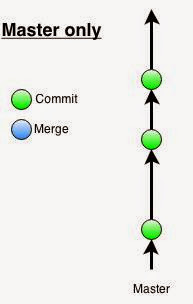 Not every team or project is going to work like this. And it may be too complicated for some. It may be appropriate to just work on master without branching and merging. I do this now with some of the clients I work with.

You may not be working for a business, and so the term “business owner” may not fit your situation. But there should always be someone who approves the changes as acceptable for release. That person should be the same one who requested the change in the first place. 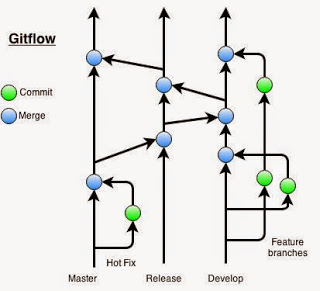 On the other end of the spectrum from a master only workflow, is Gitflow. Here there are at least three main branches: develop (or development), release, and master. There are other branches as well for features and hot fixes. Many of these are long running. For example, you merge develop into the release branch but then you continue working on develop and add more commits. The workflow looks like this:

When I worked for Backcountry.com we used a similar workflow, however we used different names for the branches. All development happened on master, feature branches were branched off and then merged back into master. Then we branched master to create a new release branch. And then we merged the release branch into a branch called “production”. And since master is just a branch and doesn’t have to be special, you could use a branch named whatever you want for your production code.

There are many other examples we could go over and discuss, but these should be enough to get you thinking about different possibilities. There are a few guidelines that you should consider for your workflow:

These should help you adjust your software development workflow using Git to fulfill its purpose of helping people. Helping you.

There is a lot more you can read about on this topic, and here are several good places to start: