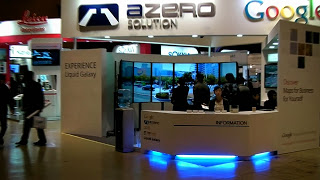 This partnership promises to be beneficial for the South Korean market. Already, A-Zero has lined up a number of engagements where the Liquid Galaxy could be deployed, bringing the incredible display platform together with the wealth of data resources in one of the most online-savvy countries in the world.

“We look forward to great business opportunities with our new friends at End Point,” said Cho Hyungwan, Director of Business Development for A-Zero. “We can see many uses for the platform here in our market.” A-Zero is a systems integrator and software development company based in Seoul with skills in GIS data manipulation, complex system deployments, and close relations with Google Enterprise partners in the region. 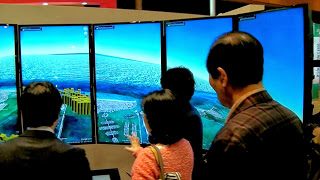 To kick-off this partnership, End Point brought a Liquid Galaxy Express to Seoul to show the platform at a nation-wide GIS conference together with A-Zero. The trade show was a great success, leading to several leads and near constant crowds at the booth.

As the lead agency for development and installation, End Point has brought Liquid Galaxies to over 50 locations around the world, including corporate offices, trade shows, and museum exhibits. End Point has installed numerous Liquid Galaxies in the United States and around the world, including permanent displays in Berlin, Brussels, Hamburg, Jakarta, London, Paris, Mexico City, Monaco, Moscow, Singapore, and Tokyo, and has set up and supported Liquid Galaxies at events in Amsterdam, Berlin, London, Jeju Island, Milan, Munich, Singapore, Sochi, Stockholm, Madrid, Munich and Paris.

End Point is based in New York City, and has been providing technical development and solutions to complex problems for their clients since 1995. With over 35 developers and visualization specialists, End Point is the lead agency for providing turn-key installation, customization, and ongoing support for the Liquid Galaxy platform.