I ran into this issue the other day while testing a new feature for a client site. The code worked well in Chrome, Firefox, Safari and IE (8-11) but it blew up in IE7. The page was fairly straightforward—​I was using jQuery and the excellent doT.js templating library to build up some HTML and add it to the page after the DOM had loaded. This content included several links like so:

Each of the links pointed to their corresponding counterparts which had also been added to the page. The JavaScript code in question responded to clicks on the “More Info” links and used their href attribute as a jQuery selector:

As I debugged in IE7, I determined that it was adding the fully qualified domain name to the links. Instead of “#panel2” the href attributes were set to “http://example.com/#panel2” which broke things—​especially my jQuery selectors. Fixing the issue was straightforward at this point:

When the href attribute begins with http, discard everything before the hash (#).

Although the problem had been solved, I was still curious as to why this was happening. While the .href property (e.g. myAnchor.href) of a link will return the entire domain in all browsers, getAttribute(‘href’) will return only the text of the attribute. I believe the $.attr() method from jQuery is using getAttribute() behind the scenes. For modern browsers, calling $.attr() or getAttribute() worked as I was expecting.

However IE 6 and 7 had different ideas about this: 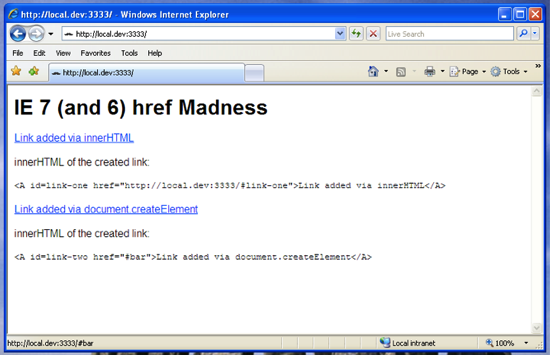 Notice that the fully qualified domain name is prepended to the href attribute in the first example.

The following screenshot demonstrates how Chrome and other modern browsers handle the same code: 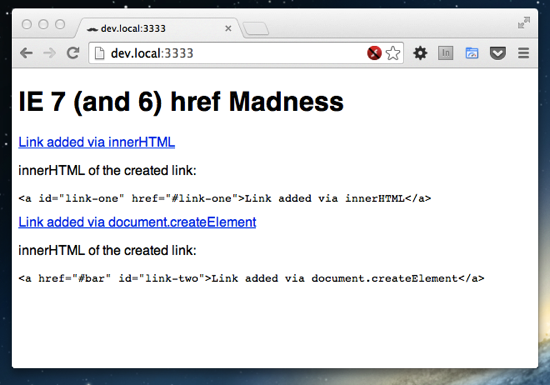 You learn something new every day!