SSH ProxyCommand with netcat and socat 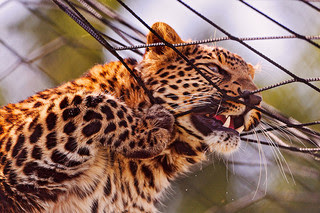 Picture by Tambako the Jaguar

Most of my day to day is work is conducted via a terminal, using Secure Shell (SSH) to connect to various servers. I make extensive use of the local SSH configuration file, ~/.ssh/config file, both to reduce typing by aliasing connections, and to allow me to seamlessly connect to servers, even when a direct connection is not possible, by use of the ProxyCommand option.

There are many servers I work on that cannot be directly reached, and this is where the ProxyCommand option really comes to the rescue. It allows you to chain two or more servers, such that your SSH connections bounce through the servers to get to the one that you need. For example, some of our clients only allow SSH connections from specific IPs. Rather than worry about which engineers need to connect, and what IPs they may have at the moment, engineers can access servers through certain trusted shell servers. Then our engineers can SSH to one of those servers, and from there on to the client’s servers. As one does not want to actually SSH twice every time a connection is needed, the ProxyCommand option allows a quick tunnel to be created. Here’s an example entry for a .ssh/config file:

So now when we run the command ssh acme, ssh actually first logs into proxy.example.com as the user “greg”, runs the nc (netcat) command (after plugging in the host and port parameters for us), and then logs in to gmullane@pgdev.acme.com from proxy.example.com. We don’t see any of this happening: one simply types “ssh acme” and gets a prompt on the pgdev.acme.com server.

Often times more than one “jump” is needed, but it is easy to chain servers together, such that you can log into a third server by running two ProxyCommands. Recently, this situation arose but with a further wrinkle. There was a server, we’ll call it calamity.acme.com, which was not directly reachable via SSH from the outside world, as it was a tightly locked down production box. However, it was reachable by other boxes within the company’s intranet, including pgdev.acme.com. Thus to login as gmullane on the calamity server, the .ssh/config file would normally look like this:

Thus, we’d expect to run ssh acme_calamity and get a prompt on the calamity box. However, this was not the case. Although I was able to ssh from proxy to acme, and then from acme to calamity, things were failing because acme did not have the nc (netcat) program installed. Further investigation showed that it was not even available via packaging, which surprised me a bit as netcat is a pretty old, standard, and stable program. However, a quick check showed that the socat program was available, so I installed that instead. The socat program is similar to netcat, but much more advanced. I did not need any advanced functionality, however, just a simple bidirectional pipe which the SSH connections could flow over. The new entry in the config file thus became:

After that, everything worked as expected. It’s perfectly fine to mix socat and netcat as we’ve done here; at the end of the day, they are simple dumb pipes (although socat allows them to be not so simple or dumb if desired!). The arguments to socat are simply the two sides of the pipe. One is stdin (sometimes written as stdio or a single dash), and the other is a TCP connection to a specific host and port (which SSH will plug in). You may also see it written as TCP4, which simply forces IPv4 only, where TCP encompasses IPv6 as well.

The options to netcat are very similar, but shorter as it already defaults to using stdin for the one side, and because it defaults to a TCP connection, so we can leave that out as well. The “-w 180” simply establishes a three minute timeout so the connection will close itself on a problem rather than hanging out until manually killed.

Even if both netcat and socat were not available, there are other solutions. In addition to other programs, it is easy enough to write a quick Perl script to create your own bidirectional pipe!