I attended the OpenSQL Camp last weekend, which ran Friday night to Sunday, November 14-16th. This was the first “unconference” I had been to, and Baron Schwartz did a great job in pulling this all together. I drove down with Bruce Momjian who said that this is the first cross-database conference of any kind since at least the year 2000.

The conference was slated to start at 6 pm, and Bruce and I arrived at our hotel a few minutes before then. Our hotel was at one end of the Charlottesville Downtown Mall, and the conference was at the other end, so we got a quick walking tour of the mall. Seems like a great place—​lots of shops, people walking, temporary booths set out, outdoor seating for the restaurants. It reminded me a lot of Las Ramblas, but without the “human statue” performance artists. Having a hotel within walking distance of a conference is a big plus in my book, and I’ll go out of my way to find one. 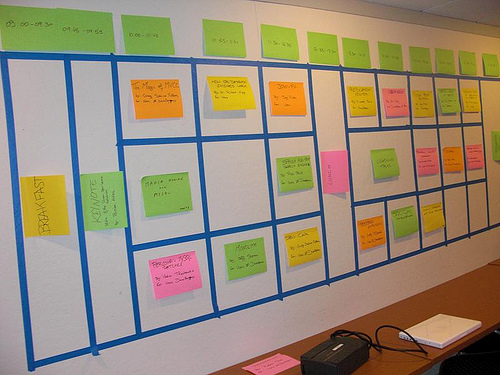 The first night was simply mingling with other people and designing the next day’s sessions. There was a grid of talk slots [on a wall](https://www.flickr.com/photos/datacharmer/3031124599/), with large sticky notes stuck to some of them to indicate already-scheduled sessions. Next to the grid were two sections, where people added sticky notes for potential lightning talks, and for potential regular talks. There were probably about 20 of each type of talk by the end of the night. The idea was to put a check next to any talk you were interested in, although I don’t think everyone really got the message about that, judging by the number of checks vs. the number of people. At one point, we gathered in a circle and gave a quick 5 word introduction about ourselves. Mine was “Just Another Perl Postgres Hacker.” There were probably around 50-60 or so people there, and the vast majority were from Sun/MySQL. A smaller group of people were non-Sun MySQL people, such as Baron and [Sheeri](http://sheeri.com/). Coming in at a minority of two was Bruce and myself, representing [Postgres](https://www.postgresql.org) (although Saturday saw our numbers swell to three, with the addition of Kelly McDonald). However, the smallest minority was the [SQLite](https://www.sqlite.org/index.html) contingent, consisting solely of [Dr. Richard Hipp](http://www.hwaci.com/drh/) (whom it was great to meet in person). Needless to say, I met a lot of MySQL people at this conference! All were very friendly and receptive to Bruce and myself, and it did feel mostly like an open source database conference rather than a MySQL one. Seven of the twenty one talks were by non-MySQL people, which means we were technically overrepresented. Or had more interesting talks! ;)

After heading back to the room and reviewing my notes before bed, I got up the next day and caught the keynote, given by Brian Aker, about the future of open-source databases. Thanks for the Skype/Postgres shout out, Brian! :) A comment by Jim Starkey at the end of the talk led to an interesting discussion on bot nets, the current kings of cloud computing.

My talk on MVCC was the first talk of the day, which of course means lots of technical difficulties. As usual, my laptop refused to cooperate with the overhead projector. In anticipation of this, I had copied the presentation in PDF format to a USB disk, and ended up using someone else’s Mac laptop to give the presentation. (I don’t remember whose it was, but thank you!) I’ve given the talk before, but this was a major rewrite to suit the audience: much less Postgres-specific material, and some details about how other systems implement MVCC, as well as the advantages and disadvantages of both ways. Both Oracle and InnoDB update the actual value on disk, and save changes elsewhere, optimistically assuming that a rollback won’t happen. This makes a rollback expensive, as the old diffs must be looked up and applied to the main table. Postgres is pessimistic, in that rollbacks are not as expensive as we simply add an entire new row on update, and a rollback simply marks it as no longer valid. Both ways involve some sort of cleaning up of old rows, and handle tradeoffs in different ways. There was some interesting discussions during and after the talk, as Jim Starkey and Ann Harrison weighed in on how other systems (Falcon and Firebird) perform MVCC, and the costs and tradeoffs involved. After the talk, I had some interesting talks with Ann about garbage collection and vacuuming in general.

The next talk was by Dr. Hipp, entitled “How SQL Database Engines Work”, which was fascinating as it gave a glance into the inner working and philosophy of SQLite, whose underlying assumptions about power usage, memory, transactions, portability, and resource usage are radically different from most other database systems. Again there was some interesting discussions about certain slides from the audience within the talk.

The competing talk for that time slot was “Libdrizzle” by Eric Day. While I missed this talk, I did get to talk to him the night before about libdrizzle, among other things. Patrick Galbraith and I tried to explain the monstrosity that is XS to Eric (as he and I maintain DBD::mysql and DBD::Pg respectively), and Eric showed us how PHP does something similar.

My DBIx::Cache talk was sabotaged by Bruce having a better session at the same time, so I attended that instead of giving mine. I’ll post the slides for the DBIx::Cache talk on the OpenSQL Camp wiki soon, however. I liked Bruce’s talk (“Moving Application Logic Into the Database”), mostly becasuse he was preaching to the choir when talking about putting business logic into the database. There was an interesting discussion about the borrowing of LIMIT and OFFSET from MySQL and putting it into Postgres, and we even helped Richard figure out that he was unknowingly supporting the broken and deprecated Postgres “comma-comma” syntax. Bruce’s talk was very polished and interesting. I suspect he may have given talks before. :)

Lunch was catered in, and I talked to many people while eating lunch, indeed over the conference itself. Apparently MySQL 5.1 is finally going to be released, this time for sure, according to first Giuseppe and then Dups. Post-lunch were the lightning talks, which I normally would not miss, but their overall MySQL-centricness and my interest in another session, entitled “MySQL Unconference” by Sheeri K. Cabral, drew me away. Bruce, Sheeri, Giuseppe Maxia, and myself talked about the details of such a conference. It was a very interesting perpective: MySQL has the problem of a “one company, and no community” perception, while Postgres suffers from a “all community, and no company” perception. Neither perception is accurate, of course, but there are some seeds of truth to both.

Bruce’s second presentation, “Postgres Talks”, turned into mostly a wide-ranging discussion between those present (myself, Bruce, Ann, Kelly, Richard, others?) about materialized views, vacuum, building query trees, and other topics.

I bailed out on my fellow Postgres talk “Postgres Extensions” by Kelly McDonald (sorry Kelly). I had already picked his brain about it earlier, so I felt not too much guilt in attending “Atomic Commit In SQLite” by Dr. Hipp. Again, it’s fascinating to see things from the SQLite perspective. Not only technically, but how their development is structured is different as well.

I was not feeling well, so I ran back to the hotel to drop off my backpack with super-heavy laptop inside, and thus missed my next planned talk, “Unix Command Line Productivity Tips”. If anyone went and can pass on some tips in the comments below, please do so! :)

The final talk I went to was “Join-Fu” by Jay Pipes. I honestly had no idea what this talk would be about, but I actually found it very interesting (and entertaining). Jay is a great speaker, and is not shy about pointing out some of MySQL’s weaknesses. The talk was basically a collection of best practices for MySQL, and I actually learned not only things about MySQL I can put to use, but things to apply to Postgres as well. He spent some time on the MySQL query cache as well, which is particularly interesting to me as I’d love to see Postgres get something similar (and until then, people can use DBIx::Cache of course!).

After the final set of presentations was more mingling, eating of some pizza with funky toppings, and planning for the nexy day’s hackathon. All the proposed ideas were MySQL-specific, as to be expected, but Bruce and I actually got some work done that night by looking over the pg_memcached code, prompted by Brian. I had looked it over a little bit a few months ago, but Bruce and I managed to fix a bug and, more importantly, found other people to continue working on it. Don’t forget to take the credit when they finish their work, Bruce! :)

All in all, a great time. I would have liked to see the presentations stretched out over two days, and to have seen a greater Postgres turnout, but there’s always next year. Thanks to Baron for creating a unique event!